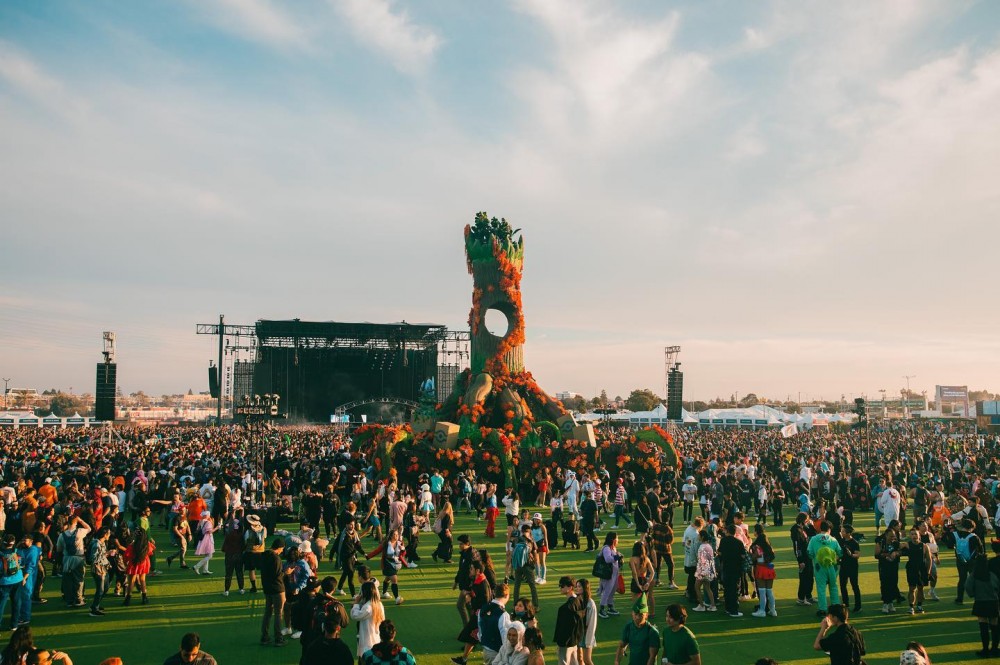 Second Sky 2022 took over the Oakland Arena Grounds on Saturday with salute, Kyary Pamyu Pamyu, Magdalena Bay, Hudson Mohawke, Skrillex, RL Grime, Virtual Self b2b G Jones, and Porter Robinson. Attendees celebrated Hallow’s Eve with a great show, fun costumes, and good vibes. This is my second SS event; I attended the inaugural event in 2019. A switch in venue but a great experience, even if the second day canceled. I honestly like one day, one stage events. Seeing everyone from beginning to end was great. Let’s review.

I made it inside to see Kyary Pamyu Pamyu first. The Japanese tarento, singer, and model played some of her greatest hits. She is such a treasure, with great stage performance. She introduced each song in Japanese and English; her two dancers matched her energy on stage perfectly. Everyone jammed to ‘Invader‘, ‘Pon Pon Pon‘, Steve Aoki’s remix of ‘Cherry Bonbon‘, ‘Fashion Monster‘ and a few other songs. It is a nice change of pace to see artists singing and performing.

Magdalena Bay played her first Second Sky with indie electronica, chill music. Some tracks reminded me of Imogen Heap. Following her, I saw Hudson Mohawke for the first time. He threw down hard tracks and a set I hadn’t really heard of before. But it’s nice to hear new music and he ended with a remix of ‘Higher Ground‘ which I loved. Next, Bladee. This is the second time seeing him; the first at Hard Summer in July. His few token fans sung with him on his hip hop tracks.

Skrillex blew my mind! A great special guest pick and I’m so glad I got to see him for the first time. He played the second day as special guest in 2019 at SS. Now, he’s back with his first event of 2022. Sonny went HARD with wobbly, deep, dubstep tracks. His set hypnotized me with its beats. However, 15 minutes into his set, his CDJ equipment breaks. He calls for help and techs rush onstage. A track intro looped for a good while before things could work again. Eventually, he skipped to the next part and everything continued. Hearing Skrillex play his version of ‘Cinema’ and ‘Scary Monsters and Nice Sprites’, oh I am still reeling from his set. He brought back some Jack U and Fred Again…, mixing all kinds of energies with dub, bass, and even drum and bass. Porter and Skrillex’s friendship go way back so their heartfelt tribute at the end of his set was great to see. Tracklist is here. Check out his set below.

I had no idea what to expect with a b2b from Virtual Self and G Jones. I love Virtual Self and seeing him again since The Shrine in 2019 made me soar. He played ‘Angel Voices‘ and brought back the legendary unreleased track ‘God Rays‘ plus various others. Their set took place at sunset, when the skies turned into cotton candy. The moon sat above the horizon and the breeze blew through the bay. I cannot express how much listening to music by the water feels. Just do it. The first half of their set consisted of a true b2b, taking turns with their sound. The second half consisted of unreleased music ending with ‘Eon Break‘. Tons of high energy and maybe a once in a lifetime b2b.

I saw RL Grime for my first real full set of his. Of course he brought down the crowd with various trap house and deep cuts of new music. Grime provided the spooky themed set of the night. With pyrotechnics and bone chilling visuals of aliens, screeches, and space travel, check out his face melting set below. The classic tracks include ‘Core‘ and ‘Pressure‘. But he brought out ISOxo for a new track and played various kinds of sounds including some psytrance and hardstyle. I didn’t expect a set like this from him and he delivered quite well.

Y’all. Porter’s Together (Live) show was great. He got to focus on singing while his band members played. You got Jamie (drums), Jenny (keyboard), and Andy (electric guitar). They played ‘Look At The Sky‘, ‘Mirror‘, and ‘Something Comforting‘ from Nurture. Porter shed a few tears while singing and it was so wholesome. In my head while watching the band, I felt this is how Nurture should be played. And Porter actually said the same thing! He then decided to go back in time solo and share ‘Easy‘ with Mat Zo, ‘Shelter‘, ‘Language‘, and some Worlds.

Robinson interacted with the crowd heavily, speaking to them as family, sharing all the love, and being silly while riding the Potaro Mobile on stage. There is live music and then there is Porter’s live music. We already know he strives at playing everything all at once while singing. But this unique performance shows just how much he loves his craft and his fans; always pushing himself to show his music in different ways. Fans enjoyed watching him play his piano so much, we all stood silent.

At the end of his set, he told the fans a little something. He co-wrote ‘Clarity‘ with Zedd and encored with a Porter Robinson Nurture Live edit of it. Who knew?? Porter also divulged to the crowd that he learned how to play guitar for this show and one last song: ‘Everything Goes On‘ from League of Legends. With Porter’s most heartwarming of thanks to the crew, event organizers, and goodbyes to fans after, we said adieu.

I thoroughly enjoyed the music at SS, even though I didn’t get to eat any Potaro shaped snacks. A lot of firsts this weekend and I couldn’t be happier. Who needs Halloween when you have this? Now, I eagerly await to see who Porter brings to Second Sky next year.