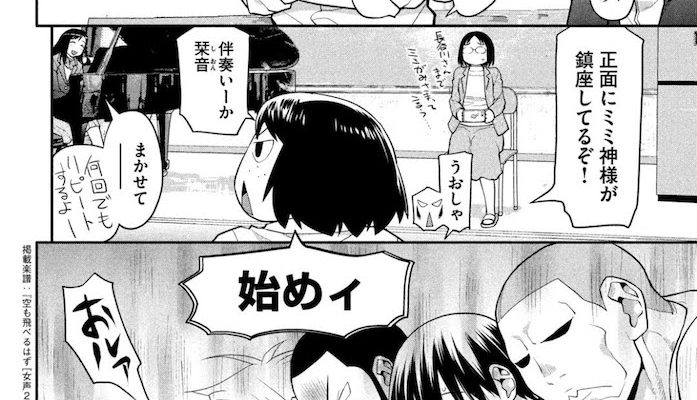 The Chorus Appreciation Society bolsters its ranks, but not all is smooth sailing.

In a small change of pace, this chapter is largely from the point of view of Kanon. Despite the big win and Kozue’s fiery speech, the only students who have decided to join the Chorus Appreciation Society are Tsuyama’s crew (aka the Tsuyamars) because Mimi-sensei is their advisor. And right as Kanon is resigned to not participating more actively because this Appreciation Society is guy-focused, Kurotaki Mai shows up both asking to join and clearly having her eyes on Akira.

After some exercise (during which Kozue explains that theirs is basically an athletics club in terms of physical conditioning), things escalate into a competition between the current guys and the Tsuyamars to see who will be part leaders. In particular, Tsuyama and Kousei have a particularly fiery rivalry, on account of their both being baritones and delinquents quick to violence. Thanks to the conditioning of the veteran members, they all retain their spots, but within the little conversations happening, Kanon senses an increased awkwardness from Jin to Akira.

I’m appreciative of the fact that Kio was willing to switch things up and give Kanon a spotlight of sorts. So far, she’s largely been the relatively normal friend of Shion and Kozue, and one might uncharitably call her “boring.” But in addition to the manga emphasizing that she’s feeling a greater desire to participate more actively in some way, Kanon is also shown to have the keenest eye when it comes to social dynamics. She immediately recognizes Mai as the girl with a huge crush on Akira. She notices a greater closeness between Shion and Kousei, as well as Jin and Kozue. And, as mentioned, she can tell that Jin’s viewing Akira differently—though it’s not certain if she’s making the connection to Jin’s mom publicly recognizing Akira’s talent in front of her son.

I’ve compared Kozue a bit to Kasukabe Saki from Genshiken because of their no-nonsense attitudes, but because of Kanon’s ability to recognize shifting relationships, I think she might fit that role better in certain respects. The fact that Kozue is kind of an oddball in her own right also means that she can’t play the straight man the way Saki would. Perhaps Kanon is more like a less abrasive Sasahara Keiko? In any case, I’d like to see at least a few more Kanon-centric chapters in the future—perhaps even one where she’s the actual center instead of just the POV character.

Ever since her introduction, I have been hoping and predicting that Kurotaki Mai would eventually join the club, and now it’s finally happened. But while she’s been a potential love interest for Akira from the get-go, I really did not expect her to be waging an active campaign for his affections! As Kanon notices, not only does Mai enter the clubroom with a clear intent and purpose (even making a beeline straight for Akira), but she went as far as shortening her skirt. I think a part of me might be a little too used to a certain greater level of old-fashioned indirectness in these story situations, but I welcome whatever this is.

Kanon is surprised to see Akira react so casually and obliviously to Mai turning up the charm, to which she begins to wonder if Akira is into “bratty” girls like Shion and Himari. Kanon is portrayed as being especially observant, but I’m not certain she has an accurate peg on him, and I still believe Mai has a chance. Also, I like how right towards the end of the chapter, we get a little glimpse into more of Mai’s personality when she urges Akira and Ogawa to keep competing. While Ogawa is willing to forfeit because he has no particular desire to be the part leader for the bass section, Mai responds with, “Huh…? But there’s no point if this isn’t a serious competition?” It’s as if she wants Akira to live up to her lofty and romantic expectations of him. In other words, we’ve got another weirdo in the group, and that means my fondness for Mai only grows stronger.

This month’s sole song is “Sora mo Toberu hazu” by Spitz. It’s only natural, because of Mimi-sensei’s love of the band and, in turn, the Tsuyamars’ worship of Mimi-sensei.

First, I think this manga is going to get even better now that we’ll be seeing more Mai. I might be biased, though.

Second, while it barely got mentioned in this chapter, I’m really expecting a greater exploration of Jin’s new tension when it comes to Akira. The idea of intra-club volatility is new to Hashikko Ensemble—not only with Jin and Akira or Tsuyama and Kousei, but also Mai and Shion—and I’m looking forward to seeing what kinds of drama and silliness arise.