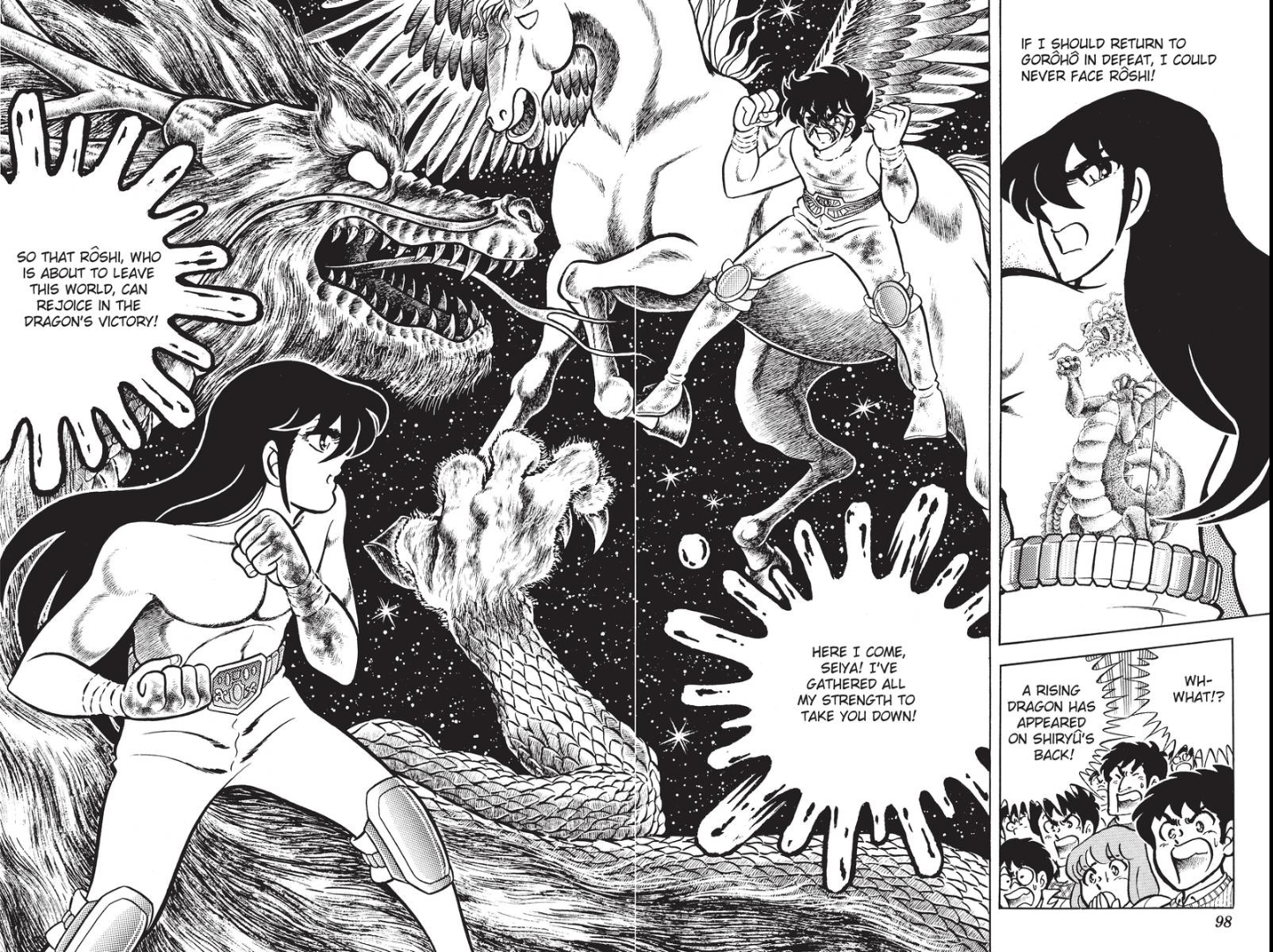 Saint Seiya is a series I’ve long known about, but one I’ve never really engaged with at its core. Sure, I loved Saint Seiya Omega. The opening theme and anthem of the franchise, “Pegasus Fantasy,” is always great at karaoke. When the characters came around on SaltyBet, things were bound to get interesting. And years before all that, I caught episodes of the English dub that committed the sin of replacing the aforementioned anthem with a middling cover of “I Ran.” Yet, I put off experiencing the original works—until now. I began to read the manga (available in English on the Shonen Jump app), and I certainly have Some Thoughts.

Because of subcultural exposure and the fact that I explore and research a lot about manga, I already have an image in my head of Saint Seiya as a work about guys teaming up to fight gods from Greek mythology using special celestial armors called “Cloth.” I know it is the pioneering work in the “boys in armor” subgenre from which spawned works like Samurai Troopers, Shurato, and Reideen the Superior. I’m fully aware that in terms of worldwide popularity, the US is the exception rather than the norm: the franchise is a beloved classic. And as for its reputation for featuring pretty boys engaging in passionate battles rife with blood and tears—a combination has made it a hit with all genders—that really says it all. Intensity, thy name is Saint Seiya. What I wasn’t prepared for is just how different the manga feels at the beginning, and how many twists and turns it takes even in the first handful of chapters.

Nothing says a certain series or franchise has to stay the same forever. Consistency can be good, but it’s not the only path to greatness. When it comes to classic Jump manga especially, there’s more than a few examples of significant pivots. Kinnikuman starts as an Ultraman parody and ends up as a wrestling story. The card game that defines Yu-Gi-Oh! in pop culture was originally a one-off story. YuYu Hakusho goes from detective mysteries to tournament arcs galore. While Saint Seiya doesn’t stray quite that far from its early roots of armored boys fighting fiercely, there are definitely points at which it feels like the author, Kurumada, was playing it by ear.

There’s a lot about different characters defying established order without readers having knowledge of what that order is, exemplified by the protagonist Seiya. He’s trying to find his sister, and in order to do so, he has to get this magical Greek armor, but then he refuses to play by the rules and instead escapes to Japan to…enter a tournament? But even that ends up being a pretense to meet the other “Bronze Knights,” who are adversaries turned eventual allies. And the incarnation of the goddess Athena, whom they’re apparently meant to fight for, begins the story as a snobby rich girl whose dad has adopted like a hundred orphans to be potential Cloth bearers. Well, okay.

Saint Seiya seems more built on spectacle than anything else, or perhaps its plot is just a pretense for putting on display these cool guys in hot fights. I say that not as a criticism but more as an observation, because I think that such an approach does make for a memorable work, as it’s more about the aura of excitement than trying to dot every “i” and cross every “t.” This early on, I know that Saint Seiya hasn’t reached the pinnacle of its power level yet, and I think I’m going to appreciate that journey.