Groove Cruise Returns to Cabo, Next Up – Miami! 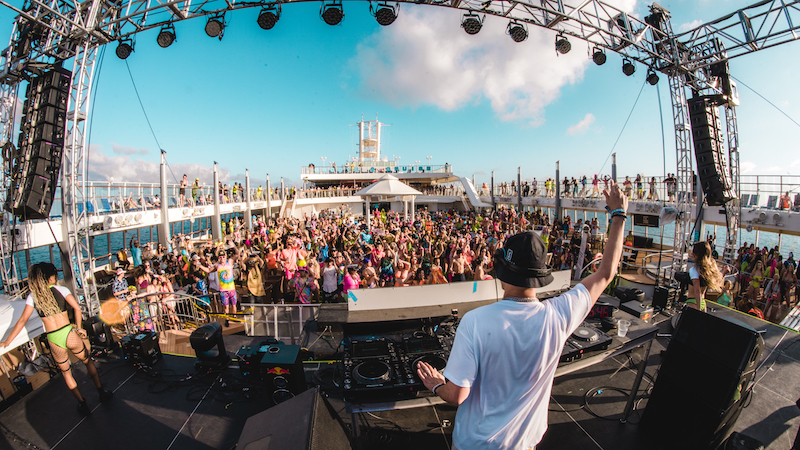 Groove Cruise Returns to Cabo, Next Up – Miami!

After four years, Whet Travel’s Groove Cruise made a triumphant return to the West Coast with ‘The Ascension,’ sailing from Los Angeles to Cabo San Lucas aboard the recently refurbished Norwegian Jewel from Wednesday, October 19 to Monday, October 24. Welcoming nearly 2,500 attendees from all across the world, Groove Cruise Cabo marked another milestone for the incomparable event brand.

The unrivaled adventure hosted nine stages throughout the cruise ship with 120 hours of non-stop music paired with five day and night time themes that provided attendees with an all-encompassing experience. Some of these themes included brightly colored nautical theme ‘Nauti Neon’, ‘Burlesque and Bowties’ affair, fairytale and sci-fi inspired ‘Moonlight and Mythology,’ an aquatic ‘Under The Sea’ theme, a nod to Halloween with ‘Rave to the Grave’, and more.

In addition to the involved daily themes, Groove Cruise consistently bridges the gap between fans and artists with a slew of artist-hosted activities. This year, ‘The Ascension’ featured a tequila tasting with Said The Sky, a dinner with Gem & Tauri at the Norwegian Jewel’s Chin Chin restaurant, Poker Tournament with Ship Wrek and Sam Wolfe, and so much more.

This year’s Groove Cruise was met with 5D Martian Circus, an immersive and interactive art collective that melds music, visual art installations, and fashion with mind, body, and soul to bring everyone together to a higher plane. It included live instrumentation and provided cosmic jams that blended psychedelic rock with cerebral dance music.

Wednesday kicked off on a high note as both veteran and first-time attendees flooded the Norwegian Jewel prepared for a 5-day adventure unlike any other. Bringing the spirit of Groove Cruise alive, the festival kicked off with a stacked roster of talent.

On Thursday, ACRAZE packed out the Main Pool Stage with his electrifying set, and the stage was closed out with performances by Ship Wrek, Max Low, Mary Droppinz, and Electric Polar Bears. Artist activities included Wine Tasting with ACRAZE and Casmalia, a Pub Crawl with record label Hood Politics, and the Great Bingo Revival with Claude VonStroke.

Friday morning kicked off with a high-energy sunrise B2B between ACRAZE and Gene Farris. The programming for the day included an exclusive destination at Me Cabo Hotel where attendees enjoyed music at two-stages at Taboo Beach Club and Confessions Skybar, featuring sets from Ekonovah, Gem & Tauri, Scooter & Lavelle, BLOND:ISH, Sam Wolfe, and more. Marking another first for Groove Cruise, organizers hosted a special Fire Flyboarding performance from a ProFlyBoarder as the night closed out with a fireworks show.

Cabo San Lucas also gave attendees a chance to explore and participate in on shore activities ranging from on-shore excursions such as jet skiing, swimming with dolphins, boat tours, hanging out on the beach with breathtaking views of the Norwegian Jewel in the background and more.

While docked in Cabo, Whet Travel launched their biggest initiative to date with the Whet Foundation. The foundation visited Casa Hogar in Cabo San Lucas made famous by the Netflix movie Blue Miracle with Dennis Quaid and Jimmy Gonzalez, along with Solmar Foundation and Heart4Cabo. Nearly 100 volunteers served breakfast and interacted with children through live art, games, music and costumes. Whet Foundation raised money and collected donations for this initiative to give back to the communities of Cabo. Additional outreach initiatives included various mental health awareness panels and workshops hosted by When The Music Stops and Ninobuni.

On Saturday, artists making their Groove Cruise debuts made history starting with the Cloud 9 Takeover at the Stardust Theatre Stage with sets from Blanke, MitiS, Said The Sky, and Trivecta who later brought their crowd to the Bliss Stage where they threw an impromptu party with Gem & Tauri. Saturday’s fun ended with a special set from DEEPFAKE at the Main Pool Stage, a five and a half hour marathon sunrise set from Anthony Attalla preceded by a Carlo Lio set at the Sports Court After Hours Stage. The Casino saw a B2B from Casmalia and Speaker Honey, and attendees could auction off their non-monetary items in Frick Frack Blackjack at the Bliss Stage.

On Sunday, the Groove Cruise attendees, affectionately known as #GCFAM, were awakened with a Deep House Brunch with sets from CHZY, Gettoblaster, Lizzie Curious, Scotty Boy and more. Closing out the festivities, Said The Sky, Nurko, Blanke, and N3WPORT hosted the Sirens Sunset at the Pool Stage. As the cruise arrived back in Los Angeles, Green Velvet and Friends set that welcomed the Monday sunrise.

This thrilling and interactive experience gives Groove Cruise attendees a glimpse into what the almost sold out Groove Cruise Miami will emulate for its 35th sailing from Miami, Florida, to the private paradise of Labadee, Haiti aboard the state-of-the-art and award-winning Celebrity Summit from Thursday, January 19 – Monday, January, 23, 2023.

The cruise consists of 96 hours of non-stop music from more than 50 artists from around the world. Headliners include Swiss-South African deep house connoisseur Nora En Pure, German trance music legend Markus Schulz, the mysterious Claptone, and Bite This label head Jauz who will be performing a special ‘Off The Deep End’ set along with 70 more of the top artists in dance music.

Groove Cruise Miami tickets are over 95% sold out with suites, insides and balconies on a waitlist, purchase tickets now.

ABOUT GROOVE CRUISE:
Known as the world’s first and premier floating dance music festival, Groove Cruise has made a lasting impact in the dance music space since its inception in 2004. Produced by Whet Travel, Groove Cruise is the only independent music cruise to sail from both the East and West coasts of the United States. The carefully crafted programming provides a unique experience for attendees which has grown into a devout fanbase throughout the past 18 years. Running throughout the entire duration of the cruise, Groove Cruise features 24/7 electronic dance music with world-class production, exotic destination experiences as well as cruise amenities and artist-involved activities.

The next Groove Cruise, Miami’s 35th departure, takes place on the Celebrity Summit from Friday, January 19 – Monday, January 23, 2023. Join EDMtunes as we sail from Miami to the private paradise of Labadee, Haiti.