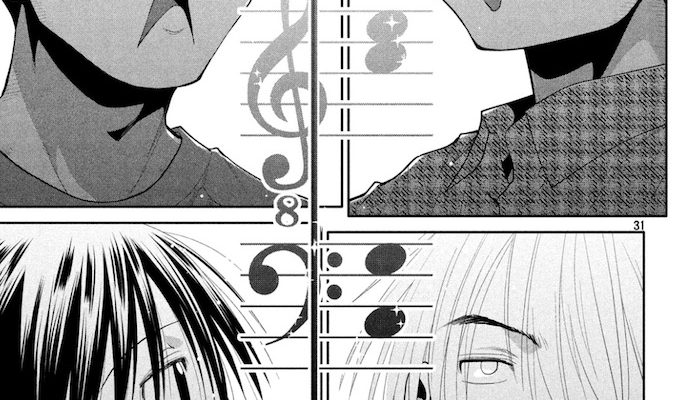 The Hashimoto Chorus Appreciation Society arrives at the site of their training camp, which is packed with seemingly all the audio equipment they’ll ever need. But as Jin is living in audiophile paradise, Akira is still thinking about seeing Jin at Himari. Jin explained that he was there to help Himari build her own speaker, but it still doesn’t sit well with Akira.

Hasegawa (who has declared her intent to join the club proper as conductor—and drag Kanon in along as well) reveals to Akira that having Jin help Himari was all her idea. In fact, she purposely timed things so that Akira would be on the previous castle trip. Hasegawa also prods Akira about his obvious feelings towards Shion.

Jin talks about his next plans for the group, which involves having the guys all sing a capella for the school festival. His motivation seems a little off somehow, but what’s even more unusual is Akira vehemently disagreeing with the decision—a first “fight” for the two. The group later goes outside to look at the stars and to practice harmonizing, only for the debate about the school festival to continue. However, the argument is suddenly interrupted when everyone realizes that Shion is missing!

It feels harder and harder to write chapter summaries for Hashikko Ensemble. Whether it’s the burgeoning (?) romances or the friction that exists between the characters, everything feels important and frivolous at the same time. Jin and Himari could just be as innocent as they claim, seeing as Jin is not one for deception, but maybe there’s still something sparking there. Akira’s crush on Shion seems to only grow stronger, and it’s clear that his reluctance towards doing a capella is that Shion (who’s only just recently healed from her hand injury) wouldn’t be able to play. Meanwhile, I suspect Jin’s eerily forceful desire to do a capella comes from wanting to further defy his mysterious mother.

Orihara seems especially tense, but I can’t really tell for sure what the reason could be. He seems like he’s trying to work through something possibly related to Shion, but I feel like the series is trying to use him as a red herring romantic rival. Orihara’s a complex yet simple character, so it’s hard to peg what he’s about, even when knowing his tragic past.

I like seeing Jin nerd out about audio electronics, even if I don’t fully understand everything that’s going on or how it’s supposed to all fit together. To be fair, that’s something I share with most of the characters in this chapter. Still, I at the very least learned that Accuphase is a manufacturer known for its power amps, and that with sufficiently good equipment, you can even hear where the singers were positioned in a room.

There’s also an interesting little training regimen shown in this chapter, meant to strengthen your voice and your muscles at the same time. In fact, the manga itself points to the original source, “Muscle Voice Training,” which can be found on Yamaha’s official Youtube channel!

As for its portrayal in this manga, one thing I find curious is that Shinji is able to generate more force in his “He!”s than the bigger and stronger Orihara. I think either Orihara is just not trying very hard (possibly out of embarrassment), or there’s something about Shinji’s castle-exploring cardio that gives him a slight edge.

You know the drill by now. It’s“Miagete Goran Yoru no Hoshi o” by Kyu Sakamoto. Most likely, things will change now that we’re seemingly moving into a new arc.

Kanon joining the club seems inevitable, but I have to wonder what role she’ll end up in.

Also, this series being a manga and all, I often picture Akira’s voice in my head as something soft and light, only to remember that he’s supposed to have a  serious bass to his voice. It’s so unlike what’s typical that I want even more to see it in anime form.