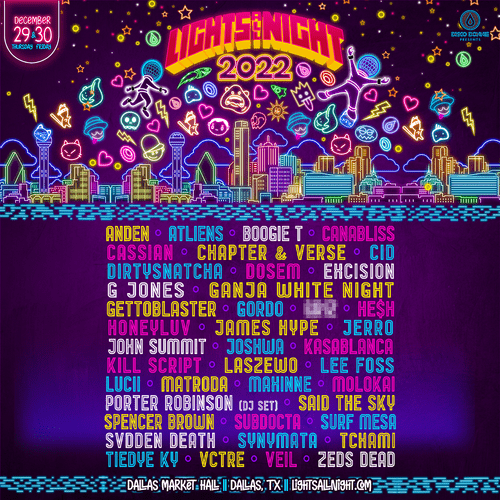 The acquisition marks the beginning of a new growth phase for Disco Donnie Presents, as Lights All Night now joins Ubbi Dubbi and Freaky Deaky for the promoter’s third annual Texas festival. These three festivals and over 300 club shows and events annually throughout Texas, make Disco Donnie Presents the state’s biggest independent promoter.

Lights All Night has become Texas’ longest running electronic music festival, and one of the most visible NYE festivals in the U.S. Over the years, headliners have included superstar artists Avicii, Calvin Harris, deadmau5, Marshmello, Skrillex, The Chainsmokers, Tiësto, and many more, while playing host to over 300,000 attendees and 500+ music acts from across the globe. With this acquisition, Disco Donnie of Disco Donnie Presents is committed to maintaining the authenticity of Lights All Night and enhancing it with his own magic and expertise.

“Acquiring Lights All Night is a watershed moment for Disco Donnie Presents. After re-establishing our own independence, I am thrilled to start a new phase of growth with our first acquisition. Over 25 years ago, I felt such a strong connection with the audience at our earliest shows in Texas and since then, the demand for dance music has exploded. Scott Osburn and his team have built an extraordinary festival and it’s an honor for us to be trusted to continue and expand on their creativity.”

Pre-sale for Lights All Night begins Monday, August 1 at 10AM CT. You can sign up for the pre-sale and enter for a chance to win backstage passes and more at Lightsallnight.com. Payment Plans are available and start as low as $26 down + shipping.