All Eyes On: Hashikko Ensemble, Chapter 45 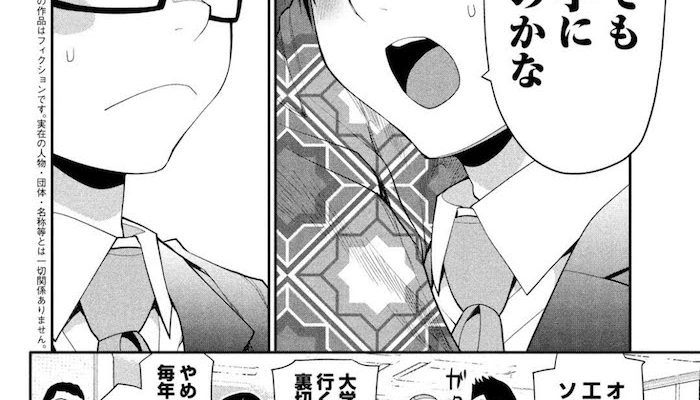 All Eyes On: Hashikko Ensemble, Chapter 45

So much of what I’ve been wanting and anticipating has finally hit in what is one of the most impactful chapters of Hashikko Ensemble yet.

At a meeting, Akira openly asks the Chorus Appreciation Society members if they think he has what it takes to get into a music college. While Tsuyama gets mad at him for bringing that up among students at a vocation-focused technical high school, Jin points to Akira’s many impressive qualities as a singer. However, while Jin’s words are filled with praise, his demeanor barely hides his conflicted emotions. But even though Jin doesn’t understand what exactly he’s feeling, it has a real effect on him physically and psychologically—Upon attempting a rehearsal, his voice cuts out, and he finds himself unable to sing. To everyone’s surprise, Jin takes a break from chorus activities.

Without Jin, the society’s general mood turns sour, and as Valentine’s Day approaches, Kozue gets an idea: Hold a private Valentine’s Day performance in their meeting room, with all the girls—even the normally non-participatory Kanon and Mimi-sensei—as the singers. The girls give the guys their chocolate (including certain romantic hopefuls trying their luck), but the “concert” itself has a couple twists. First, as per Japanese tradition, this Valentine’s Day event is to be reciprocated by the guys via a White Day performance. Second, a couple of guests are included among the girls: Hashimoto Tech’s resident arm wrestling champion,Yukina, and Jin’s childhood friend and ace soprano, Yumerun. As the performance begins, the chapter ends.

Jin’s spiral was more a matter of “when” than “if,” and it signals a crucial moment in Hashikko Ensemble. Up to this point, the friendship between him and Akira has been the lynchpin of both the manga and the Chorus Appreciation Society within. To see a serious metaphorical fracture is the most direct drama we’ve seen as of yet.

Jin’s inner conflict seems clear to me: His mind and his heart are at odds with each other. On the one hand, he intellectually understands on a deep level everything about Akira’s talents and continuous improvement, and even wants him to succeed as both a friend and a person undeniably passionate about music. On the other hand, seeing Akira accomplish so much more in such a short period (even earning praise from Jin’s infamously blunt mother) must fill him with an envy that’s hard to isolate from his other emotions. As Jin states in his thoughts, he feels proud that he’s the one who discovered Akira and who first recognized his potential, but for the master to have been surpassed by the student so soon is itself a blow to Jin’s pride in himself that he achieved through hard work. It’s like Jin wants Akira to both succeed and fail, and this has compromised his ability to approach music itself.

I live for this kind of complex emotional richness in manga.

The Girls Do Their Thing

I’ve been hoping to see the girls do their own thing. It’s not just for some arbitrary requirement to fulfill, but simply that there are so many excellent female characters that I feel they could use a spotlight that’s founded in the very gimmick of Hashikko Ensemble: music. I did not expect Yukina or Yumerun to show up, but their presence is welcome.

I suspect that the reason Yumerun is part of the performance is because this is, in part, Kozue’s plan to get Jin out of his funk, and she’s been in regular contact with Yumerun ever since M-Con. The way Jin instantly beams upon seeing Yumerun shows a connection that’s different from what he has with everyone in the main group, including Akira, and I think Kozue recognizes that bond. The deal about the guys having to return the favor on White Day only adds to the idea of this performance being a way to encourage Jin to find back.

Speaking of Yumerun, I love the reaction to her from Mai. While Hashikko Ensemble is full of eccentric personalities, there’s something about Yumerun that exudes “odd duck” vibes. It’s not just the fancy dress either, as her mere presence—especially that “anxious confidence” look she always has on her face—kind of feels like a disco ball in human form.

I also love this image of all the girls singing together because you can really see their personalities shining through. Kanon is nervous and unsure of herself. Kozue is earnest but also in an unfamiliar situation. Yumerun is, well, Extremely Extra.

“Haru yo, Koi” (“Come, Spring”) by Matsutouya Yumi. This is the song the girls start performing at the end of the chapter.

Volume 7 of the manga is on sale in Japan and worth checking out. There’s a picture of Mai and Yumerun together in swimsuits, and the fact that it came out before this chapter (which is their official first meeting) is interesting.