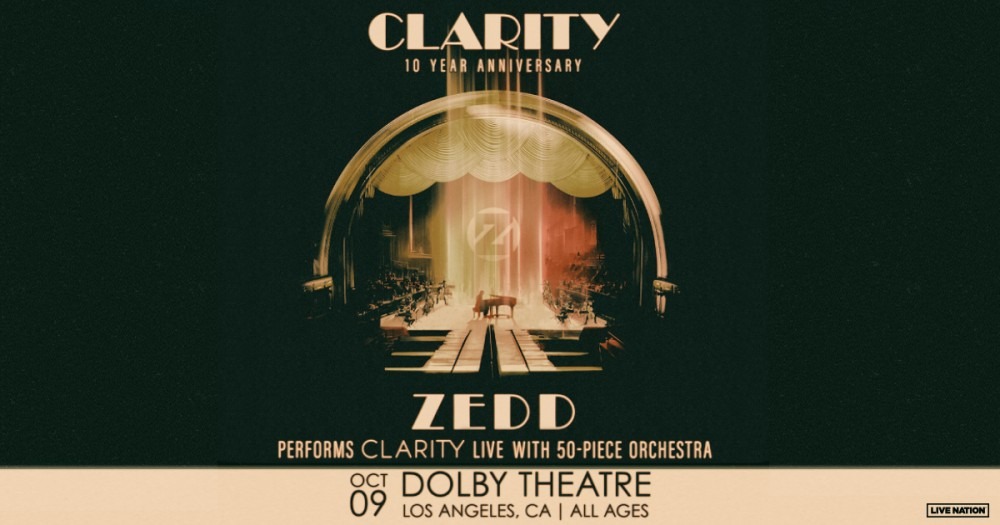 Fresh off the heels of the release of his brand-new single “Make You Say” with Maren Morris and BEAUZ, GRAMMY® award-winning global superstar, Zedd, announces he will perform Clarity live for one night only with a 50-piece orchestra to celebrate his iconic Platinum debut album’s 10-year anniversary. For the first-time ever, Zedd will be recreating the chart-topping 2012 album by performing it in its entirety, allowing fans to experience the project in a totally new and unique way. The incredibly special and once in a lifetime concert will take place on Sunday, October 9, 2022 at the legendary Dolby Theatre in Los Angeles, CA. Artist pre-sale tickets will be available on Thursday, August 25 at 10 a.m. PST, signup here. General on-sale tickets will be available on Friday, August 26 at 10 a.m. PST. All tickets can be purchased here.

This is just one of many celebrations for the 10-year anniversary of Clarity, which includes an honorary show on October 7 at the Bill Graham Civic Center Auditorium in San Francisco where Zedd will be playing the original album from start to finish, along with more surprises to come.

Multi-platinum, GRAMMY® Award-winning artist/DJ/producer Zedd made his debut with “Clarity” after signing with Interscope in 2012 and has been breaking down barriers surrounding music genres ever since. Throughout his career, Zedd has worked with a diverse range of artists to create hits, including Foxes on “Clarity” (which earned Zedd a 2014 GRAMMY® “Best Dance Recording”), Hayley Williams on RIAA platinum-certified hit, “Stay The Night” (which racked up more than 1 billion streams), and Selena Gomez on the platinum-certified track, “I Want You To Know,” which spent four weeks at #1 on Billboard’s “Hot Dance/Electronic Songs” chart. He’s also collaborated with Alessia Cara on their hit single “Stay” which has amassed over 4.7 billion streams worldwide, held the #1 spot at Top 40 radio for six consecutive weeks, and earned Zedd his second GRAMMY® Award nomination. His 2018 monster hit “The Middle” with Maren Morris and Grey is officially certified 6x Platinum by the RIAA, and the track garnered Zedd’s second #1 at Top 40 radio. Digitally, the song has over 4 billion streams worldwide and earned Zedd three GRAMMY® nominations including “Record Of The Year,” “Song Of The Year,” and “Best Pop Duo or Group Performance.” Most recently, Zedd opened the NHL All-Star Game with a performance during player introductions and he was the official pregame DJ during player warmups at this year’s NFL Super Bowl LVI.