“Are you always this happy,” asks one of the three men dressed in head-to-toe black facing DJ Mag in a semicircle. They are Moderat, Berlin’s de facto techno supergroup comprised of Apparat (Sascha Ring) and Modeselektor (Gernot Bronsert and Sebastian Szary). We are sitting in Tin Pan Alley Studios, named after New York’s turn of the 20th century music-publishing epicenter. In an appropriate update, it’s now a recording studio with DJ classes.

When it comes to Moderat, much ado is made of the meshing of their disparate styles – where Apparat is cerebral and orchestral, Modeselektor are corporal and crunk, to throw slang back to 2002 when they first fused. On their 2009 eponymous debut, Moderat proved the combination could work. On the 2013 follow-up LP, titled ‘II’, they began to feel like a band. On ‘III’, ‘Eating Hooks’ and ‘The Fool’ explore abstract atmospheres, ‘Running’ veers closest to a sublime rave anthem, ‘Finder’ flirts with haunting downtempo house, and ‘Ghostmother’ and ‘Reminder’ play with melancholy breakbeats and drum & bass. They sound as unified and self-sufficient as they claim.

In a small room with a few keyboards and a loud air conditioner, we discuss the new album and how the Moderat experience is evolving. Hint: They’re as excited as you are.

You’re about to start touring again. What do you have planned?
Sascha: “It’s hard to put electronic music on a stage. Every other kind of music just happens, it’s made on the stage. Electronic music is just reproduced on the stage.”
Gernot: “We change places.”
Sebastian: “I was on stage right, now I’m stage left. Gernot was in the middle. Now he’s on stage right. Sascha moved from stage left to the middle.”

Sounds complicated.
Gernot: “We had a guy once who would put gaffer tape on the floor with our names on it.”
Sebastian: “At one of the last shows, he left a huge strip with a big smiley, ‘Have a nice show!’”

Sascha, your music is often described in classical terms. Last time I caught you live at the Gramercy, it felt like a rock show.
Sascha: “A show with a band is always different. The last New York show was a bit more on the rock end also because it was the last show of the tour - everybody was feeling like, ‘Fuck it,’ smash everything! The European version had string players, which makes it more orchestral.”

Modeselektor, you guys are the ones with the kids and record labels [Monkeytown, and recently defunct 50 Weapons] and you’re the wild ones. How does this all fit together?
Gernot: “When we are in the studio we are not in there as Modeselektor and Apparat. You can’t tell who is doing what, what’s a Modeselektor beat or an Apparat melody. People have these clichés about who Apparat is and who Modeselektor is. Moderat is somewhere we can get rid of this. It’s a place where we can do what we don’t know what we want to, we only know… wait, what? Hold on. We don’t know what we want to do, but we do know what we don’t want to do.”

Has it gotten easier to be a single entity?
Sascha: “Even though we know each other quite well after all these years, the reality is people always change. And you have to find common ground and synchronize again. That’s why it took so long this time. The last record, we gave ourselves six months. We wanted to do the same thing again. Didn’t work.”
Sebastian: “I blame it on Jupiter, the constellations, the planets.”

How do you go back to your own work?
Sascha: “After the first record when we switched back to doing our own records we both found it difficult to do our own work without the other part. You realize it’s very valuable to have a second opinion all of the time, and people you trust.”

Modeselektor, what’s it like having this third cat in the studio with you?
Gernot: “We are very different characters. We are very social. Sascha is, let’s say, not so social. He wants, how do you say in English - his peace?”
Sascha: “Yes, peace. Give me peace.”

I’ve heard you refer to Moderat as an island. It’s nice in the beginning, but then you want to kill each other.
Sascha: “This is why it’s good to have two projects. You can always go back to the other one. After the second record, we didn’t feel like we wanted to leave the island. Also because we realized the boat service is very bad.”
Gernot: “For me, I feel like I just discovered a little piece of this island. I don’t feel that I want to leave. It would just take my energy and focus.”
Sascha: “We just didn’t want to travel back and forth.”
Gernot: “I feel there is more there.” 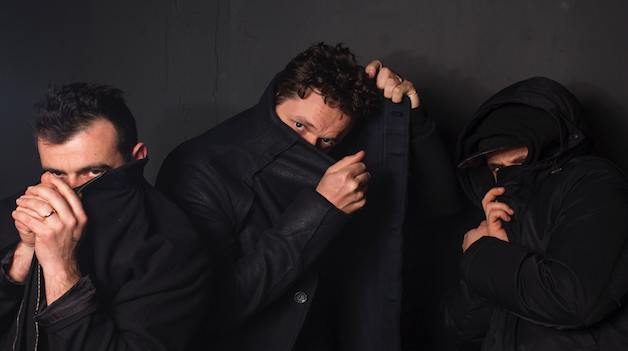 What do you do when you have a block?
Sascha: “The studio is in a Turkish area. We go and have a huge plate with kebab meat.”
Gernot: “It’s also important to accept the moment or that the day was total shit.”

Are you deliberately not involving other people to reach a specific Moderat sound?
Sascha: “We realized that we don’t need external influences anymore. We did record things with brass players and string players and drummers. We barely use any of it, but it’s important to spot new ideas.”
Gernot: “When we made the first record, or even before, we did a track with Paul St. Hilaire. We were never able to play it live because we couldn’t bring him on tour for one song. For me, the live aspect is very important.”
Sascha: “It’s already difficult to play electronic music live, and you add ‘features’, it becomes fucking impossible. And if you use playback, it’s ‘no bueno’.”
Sebastian: “Si, no bueno.”

How do these three albums connect?
Gernot: “We make records, we don’t think about connections. We cook our water with tea.”
Sebastian: “Water with tea?”
Sascha: “That’s our secret.”

What kind of tea are you making?
Gernot: “We cook our tea with water, I mean.”

Does having more vocals make this more of a pop record?
Sascha: “We started making all these ideas and in the end we had a lot of vocal songs. We made what we consider maybe a modern pop record. But it wasn’t intentional. Was it?”
Sebastian: “No, it wasn’t. Or was it?”

Are you more comfortable with singing now?
Gernot: “I’m afraid it’s too much for his voice when we’re on tour. He has to sing double time, as in…”
Sascha: “Much faster.”

Like a monk?
Gernot: “More often.”
Sascha: “I think they worry more than I do. I make these vocal ideas. The inspiration takes you there at the time. Then you’re like, ‘No, this is shit!’ Then someone finds it on the hard drive a little later.”

Final thoughts?
Gernot: “I’m happy that we’ve created another piece of the Moderat world. The world was waiting for it and I was too.”