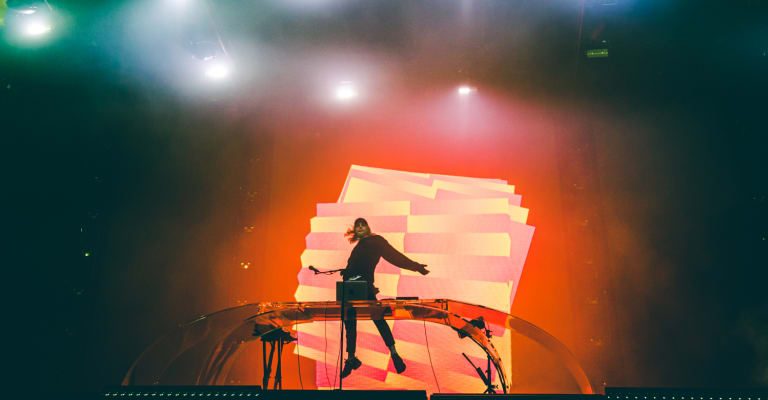 Porter Robinson’s Second Sky festival came to a close this year after taking a year off. Fans flocked to the Bay Area where they gathered shoulder to shoulder for the event. Now, you can relive the spiritual experience with Porter’s Nurture Live set on YouTube below. For those that know, he opens and closes this event so that everyone can get a chance to see the lineup of amazing talented friends he asked to come together. Such a genuine guy, this production is and will always be loved by his fans.

He opened with ‘Lifelike‘ then dropped fireworks during ‘Something Comforting‘. What I like about Porter and his live sets is that you feel and see the emotion as he plays. He rocks out on stage and everyone sings along to the same rhythm and mind. It’s all one love, connected by him and his music. He continues with ‘Look at the Sky‘ where you hear him belt the lyrics out. Fans sang and jumped along with him under the night sky and you know there probably wasn’t a dry eye in the house. Going through the set, he also played his timeless classic with Madeon, ‘Shelter‘, ‘Mirror‘, ‘Sad Machine‘, and various other Nurture tracks. It wouldn’t be a complete Porter set without him throwing in ‘Flicker‘ into ‘Language‘, which he mashed up with Totally Enormous Extinct Dinosaurs’ track ‘Unfold‘.

He ended the night with ‘Get Your Wish‘ and that wraps up his set. His live edits are just the chef’s kiss when he performs. Headliners for the show also included Wavedash, Madeon, Jai Wolf, Toro Y Moi, Jon Hopkins, Jacob Collier, and Knower. The event also virtual streamed where I caught a glimpse of Knower. With an eclectic lineup and new music genres for people and fans around the world to hear, Second Sky is an experience. We can’t wait to see what next year has in store. Through trials and tribulations of switching venues a few times, it worked out. Catch him on his Nurture Tour in LA this weekend.

Keep it up Porter!