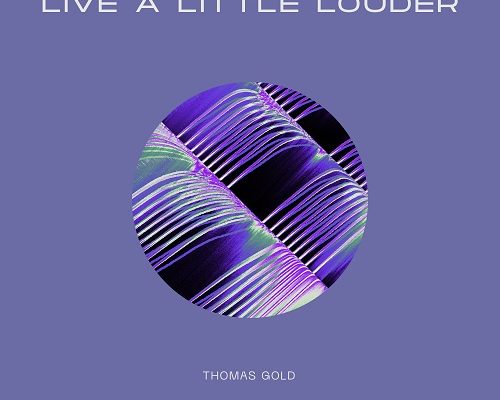 Thomas Gold delivers a rich dose inspiration just when listeners need it most with his newest single “Live a Little Louder” on Protocol Recordings. Gold makes a stunning example his signature sound on the track, weaving vibrant melodies with soulful vocals and an uplifting progressive drop. “Live a Little Louder” encourages all us to be relentless in our pursuit an authentic, inspired life, sending a much-needed message to humanity to be brave and stay positive. Don’t be surprised when you get goosebumps at the crescendo! We’re looking forward to hearing this one as a festival anthem. This is Thomas Gold’s fifth original release on Nicky Romero’s label imprint, following his club-oriented “We Remember” with Teamworx, and melodic “Someone New” with Raiden.

Over the last decade, Thomas Gold has become one the most well-known dance music producers his time. The German producer solidified his influence in 2008 when his now-iconic remix Delirium’s “Silence” was named Beatport’s “Best Progressive House Song” the year. Gold went on to release on major labels including Armada, Axtone, Size, Toolroom, Spinnin’, and Revealed; his crowning success thus far has been “Magic” on Armada has over 60M streams on Spotify. He also worked with Instagram celebrity Montana Tucker on the music video for the hit track, “Begin Again.” His electrifying abilities as a live performer have earned him a global following and headlining gigs everywhere from festivals like Ultra, EDC, Coachella, Mysteryland, and Tomorrowland, and clubs such as Pacha, Ushuaia, Amnesia and more. Gold also owns his own imprint, Fanfare Records, where he releases his own music as well as fresh sounds from up-and-coming producers.