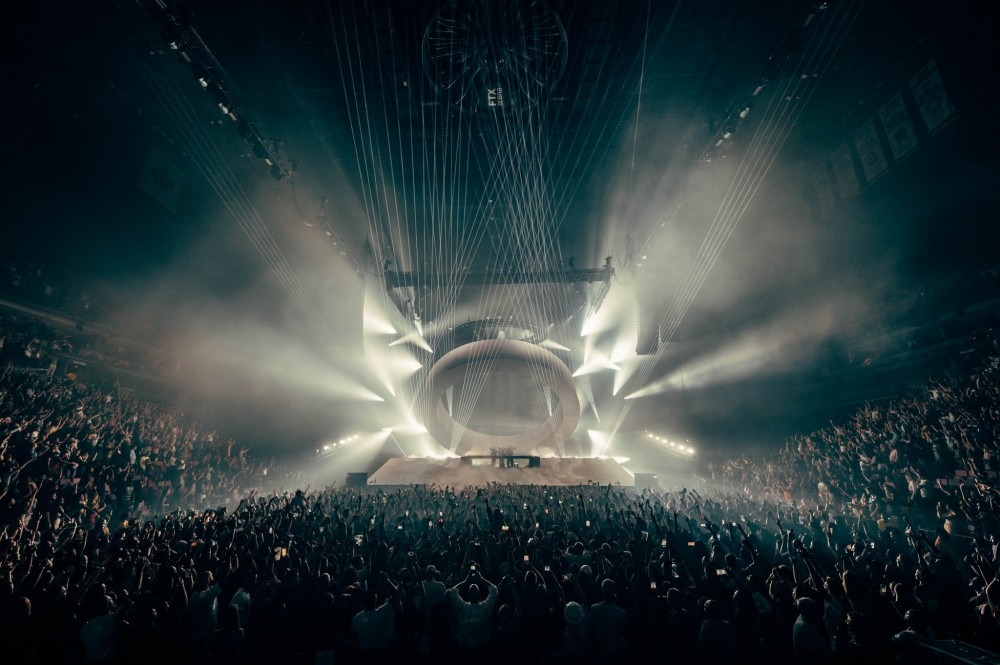 Swedish House Mafia kicked off its very first album tour in Miami on Friday night. The EDM super-trio is truly back to being a performing artist after years of being split up and then teasing their major return. As the tour drew closer, the press grew harsher. Stories of canceled stops flooded the blogosphere. Well, Swedish House Mafia knew all eyes were on them to impress, and they managed to silence the haters with an excellent first show in the Paradise Again era.

Perhaps the branding and marketing got too outrageous over time, but when the boys took the stage at the FTX Arena the doubts quickly faded away. After all, these are three very talented producers and DJs in their own right. The incredible Halo stage production made its debut at Coachella, and it wowed the audience in Miami as well.

Just like during Coachella, the trio kicked it off with Can U Feel It, before weaving through a mix of refreshed classics and some new beats. A thumping remix of The Weeknd’s Sacrifice acted as a bridge during tracks at one point, prompting some to expect a cameo. The trio also debuted their brand new Fred again… collab called “Turn On The Lights again..“, which really got the crowd roaring. Of course as the 90 minute set drew to a close we got the heavy hitters like Heaven Takes You Home, Don’t You Worry Child, and Save The World.

At the show, I noticed people that I knew from raves and festivals years ago back when Swedish House Mafia was helping kick off the golden era of EDM. In that moment I said to my friend “this really is like The Beatles of our generation, isn it?” For those of us who came up in that 2010-2013 time period and fell in love with EDM at its height, that rings true. The show was equal parts nostalgia and new. The crowd, too, was a mix of 30-somethings with some slightly older or younger. This had the feeling of a reunion tour for a classic band. For just a moment, it brought you back to that exciting time in 2012-2013 when Swedish House Mafia was such a revelation.

The tour show proved that the boys can still throw a great show for new fans and old.

The FTX Arena show was a brisk 90 minutes, so many in the crowd were hungry for more. Luckily, Swedish House Mafia decided to throw an afterparty at the legendary STORY. This show provided everything their arena show lacked. This was a real DJ set in 2022 – meaning it featured a lot of house, tech-house, and other underground sounds. It was actually shocking to hear that type of music coming from Swedish House Mafia, but then you remember that each of them got their start in House music way back when, and continue to stay in touch with the scene.

The club was packed to the brim and you could see the Swedes up there having a ball with the crowd. The boys threw down at STORY and the edgy underground vibes at that party showed that they can still play a spontaneous creative set in addition to the high-budget spectacle you’ll see on the tour.