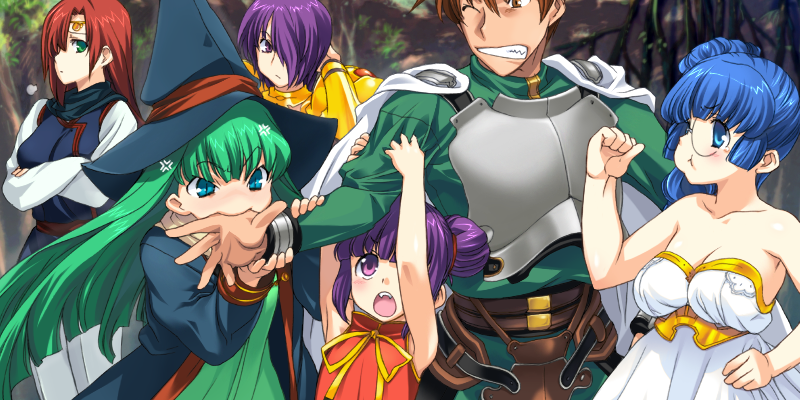 Today on the blog, we have a Rance 01 + Rance 02 tester’s corner from Mojack!

Despite doing work for MangaGamer for over two years now and being a heavy visual novel fan for far longer, I had never actually played a Rance game before. That makes it all the more appropriate that the first one I do play happens to be a remake of the very first Rance game all the way back from 1989.

One of the first things I noticed when booting up Rance 01 was how modern it looks. Character portraits are vibrant and crisp and CG’s are on par with what one would expect from any modern Alicesoft game. The music is spunky and jovial and nails the feeling of misadventures adventures. If I didn’t know any better, I’d never guess this is based on an older game from appearances alone.

It’s pretty dang apparent once you actually start playing, though, because Rance 01 is old school and proud of it. It took me a good thirty minutes before I realized that I couldn’t just save at any point and had to go to an inn to do so. Some monsters even in the starting zone will completely whoop your ass if you’re not prepared and some field traps sentence you to almost certain doom.

The first couple of hours were a swift kick to the balls that forced me to rethink how I approached the game. The game is more about preparation rather than strategy in battle, and once I wrapped my head around that I was able to start making swift progress throughout. It just took some patience and a little bit of grinding.

Learning the ropes was made easier thanks in large part due to how surprisingly easy it is to advance the story despite being based on an old adventure game. I was totally expecting to have to refer to a guide in order to figure out what obscure square peg I was missing to put in an equally obscure round hole, but that turned out not to be the case at all. Rance and his cast were always pretty clear on what had to be done next, which I appreciated.

I can definitely see why Rance has such a strong following after playing Rance 01. Even in this earliest incarnation of the man in green, there’s morbid humor that ties him altogether. With gameplay systems that have only supposedly improved in subsequent entries, I’m definitely curious to check them out. I’m glad I got to start from the beginning, though, if only because something tells me this is the only time Sill ever catches a break.

Rance 01 & Rance 02 are now available for purchase exclusively on MangaGamer.com!