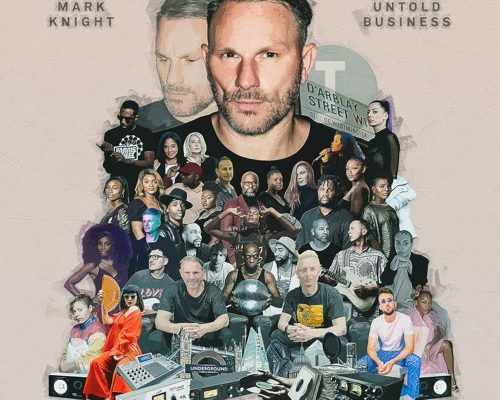 Mark Knight’s new album Untold Business is out and its fire. Feast your ears on 13 tracks of much-needed vocal house. You’ll want to save this playlist because it brings you all the groove vibes that define the world of dance music. Knight goes back to his roots with this one, showcasing his signature sounds and records from back in the day. What’s more, is you’re also getting classic Funk, House, Soul, and Disco records from the 1970s and 80s.

‘Everything’s Gonna Be Alright‘ starts off the compilation and features vocals from Beverley Knight and the London Community Gospel Choir. Together, they bring a powerful message of positivity, solidarity, and hope. And it is so catchy, with an infectious melody that keeps you dancing every time you hear it. ‘Bit by Bit’ further adds to the soulful, vocal-led house music of the 90s vibes. Following this is ‘Feel The Pressure‘ featuring Shingai, a disco-funk track with a rapturing bassline ready to make your knees weak. Watch out for those record scratches throughout. ‘Love Is All We’re Living For‘ features Gia and is a calm, soothing track still in the era of house, soul, and disco. Gia’s vocals set the mood for its soundscape.

‘You Saw Me‘ blends the deep elements of house with a catchy bassline for some more modern house moves. Damon Trueitt’s perfect vocals make this track killer. ‘It’s A Wonder‘ featuring Alex Mills takes us to the tropics with a bright track, while ‘10,000‘ reigns in the disco. There is so much love, soul, and energy in the entire album that you’ll have to listen to it the whole way through. From ‘Untold Business‘ until ‘Tonight‘, the Toolroom founder shows us why he is the master of his craft.

“I wanted to write a song of hope as we come out of this incredibly tough time. I feel that musicians and producers have a responsibility to provide the soundtrack to people’s lives, and with this glimmer of hope on the horizon, I wanted this song to be a moment of positivity for the future ahead.”

Enjoy this meticulously crafted collection of positive, life-affirming records centered around real instrumentation and proper craftsmanship. Untold Business is the antithesis of your typical dance music that we’ve seen over and over again. In addition, three of the tracks are Mark’s singles from 2020.