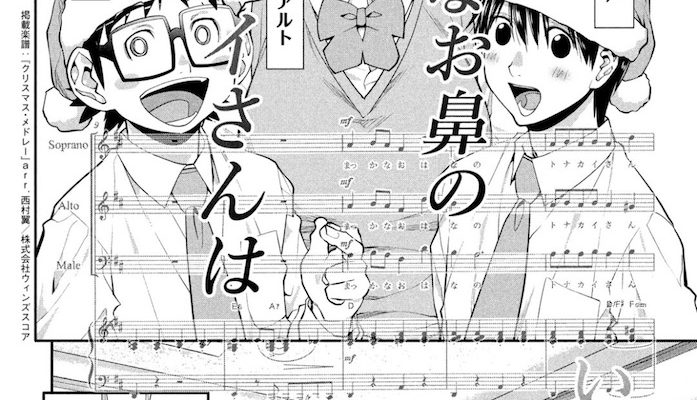 We get a glimpse of Kousei’s home life (and a Christmas concert!) in Hashikko Ensemble, Chapter 43.

The Chorus Appreciation Society is visiting the orphanage where Kousei’s been raised, and they plan to hold a Christmas concert for the kids there. ItThere, Akira and the others meet three people in particular: Zenba Yoshimi, the assistant director of the orphanage; Hayase Minori, a 6th grader; and Sawamura Rikurou, a middle school delinquent. Rikurou clearly looks up to Kousei, and he doesn’t understand why Kousei would hang out with the Chorus Appreciation Society or take up singing.

The day of the concert, members of the Appreciation Society are dressed for the occasion, with Kousei taking on the role of Santa Claus himself. The Tsuyamers then come in as namahage (New Year’s demons) to “scare” the children, only for a fight between Santa Kousei and Hage Tsuyama to be interrupted by Kozue dressed as God. Though part of the show, the tension between Kousei and Tsuyama is all too real.

God Kozue proposes a singing competition instead. Tsuyamers go with “My Neighbor Totoro,” while Akira’s group sings “Let It Go.”

I appreciate the particular blend of cultures we see around Christmas and New Year’s in Japan, between the Santa stuff, the namahage, and Kozue as the Judeo-Christian God with stereotypical white beard and all. The fact that they didn’t go with Jesus probably says a lot.

I find it noteworthy how this chapter is how it starts, which is right at the orphanage. There was no scene in the previous chapter showing Kousei explaining his past to the other characters, nor was there any discussion regarding singing at his orphanage. And yet, because the characters have such strong and rich portrayals, it’s easy to imagine how this ended up happening. In particular, because Kousei has opened up over time, one gets the sense that he barely okayed this because he’s easily embarrassed but would like to give back to the place where he grew up.

It’s also through the new characters we meet that we can get a glimpse of what Kousei’s life has been like since he was rescued from his abusive mother.

The People in Kousei’s Life

Yoshimi, Minori, and Rikurou each make quite strong first impressions, and it’s easy to see how they’ve affected and been affected by having Kousei in their lives.

At the start of the chapter, Kozue asks Yoshimi what Kousei was like as a kid, and despite Kousei angrily telling Yoshimi to keep shut, she nonchalantly mentions him often crying at night. She seems like a tough lady who takes no shit from anyone, and someone who’s accustomed to handling children like Kousei and Rikurou. I can also easily see her attitude rubbing off on Kousei. The orphanage itself also seems well run.

Minori tries to act mature, explaining that she’s not like the other little kids there. Yoshimi explains to the group that she’s smart, but she’s also in a hurry to grow up. From the little we see of her, she does come across as actively trying to have a good head on her shoulders, even dispensing advice to the older Rikurou. Minori is the one who points out that Kousei established the rule about not hitting anyone younger than you at the orphanage, and calls out Rikurou’s anger as jealousy over possibly losing Kousei.

Rikurou is the closest in demeanor to Kousei, to the point that much of it is probably him trying to emulate his role model. The kid clearly thinks the world of Kousei, and he’s threatened by the Chorus Appreciation Society the way an only child might feel about a new sibling. There’s fear and pain there, and Rikurou likely tries to compensate for it with his tough-guy persona.

There are a few moments concerning the ever-so-slightly icier relationship between Jin and Akira. Jin mentally notes how much Akira has improved, while Akira realizes he kind of likes the change in attitude from Jin towards him. While not explained why Akira sees an upside to this, it’s probably because Jin has always been this larger-than-life figure when it comes to singing. For Jin to look at Akira with any kind of envy is, in a certain sense, a sign of Akira’s own progress.

Because they’re singing for an orphanage, all the tunes this month are for kids.

(Note that Youtube doesn’t let you add children-oriented videos to playlists, so many of these won’t be included on the big Hashikko Ensemble playlist).

“My Neighbor Totoro” from the Studio Ghibli film

It’s interesting that the three characters we meet at the orphanage are all different age groups compared to Kousei. Their interactions show less of a peer dynamic and more of a somewhat intergenerational one. Because these three aren’t high school age, I don’t think we’ll be seeing a whole lot of them, but I’m sure they’re going to pop up from time to time even after this specific story ends.