Insomniac Took HARD Summer to the Next Level [Event Review]

Insomniac Took HARD Summer to the Next Level [Event Review]

If you live in Southern California and are a music fan any kind, chances are you’ve been to a HARD Summer. Celebrating its 11th edition this year, HARD Summer is certainly one the most venerated and revered festivals on the circuit. However, HARD has always had a fraught existence in its decade under founder Gary Richards AKA Destructo. While it is undoubtedly a great time, HARD has consistently faced logistical issues including having four different venues in four years since it departed L.A. State Historic Park after 2013.

Just prior to last year’s HARD Summer, Richards announced he was leaving Live Nation and the HARD brand, and there was definitely an air finality hanging over last year’s festival. However, promptly after HARD Summer 2017, HARD 2018 was announced and here we are having wrapped up an incredible weekend. Enter industry heavyweight, Insomniac; with Richards out the picture, HARD Summer is now ficially an Insomniac festival. While this is not a new thing, this is the first year that Insomniac is not behind the scenes and is fully at the helm the event. (Insomniac has owned the HARD brand since 2013.) Their fingerprints were all over the place, and in all the best ways. 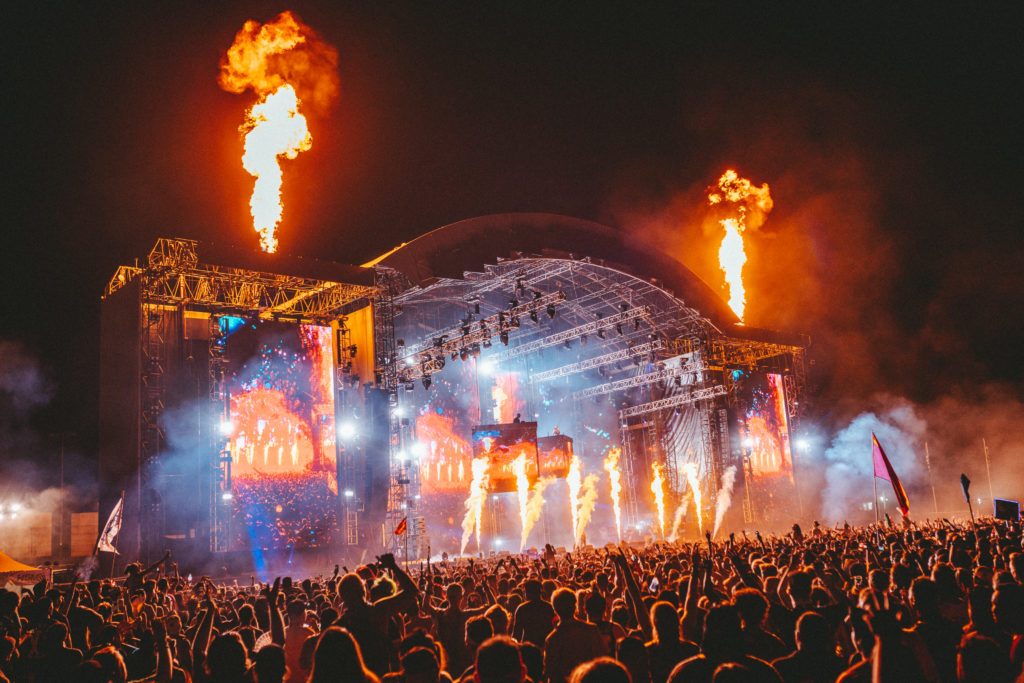 The venue relocated back to Fontana Auto Club Speedway, where it was held in 2016. However, the layout was a little different this time around. HARD Stage was at west side the speedway, while HARDer Stage was at the east end. Pink Tent occupied a spot at the north end the lot, a little less than halfway from HARD to HARDer Stage. Purple and Green Tents each occupied spots on the south end the grounds. There was a ferris wheel, as well as tons food trucks and concession stands, and even a King Taco! Although the Speedway is huge and has a lot ground to cover, the festival was easy to navigate. Insomniac also went big with shade and misters. Both HARD and HARDer stages had shaded viewing areas far away from the main crowd, but with sound that made you feel like you were right up front. There were also long stretches tents with misters as well. Additionally, there was also a ton astroturf, and most the festival grounds were on dirt as opposed to asphalt. Insomniac definitely took steps to keep the crowd cooler and more comfortable. 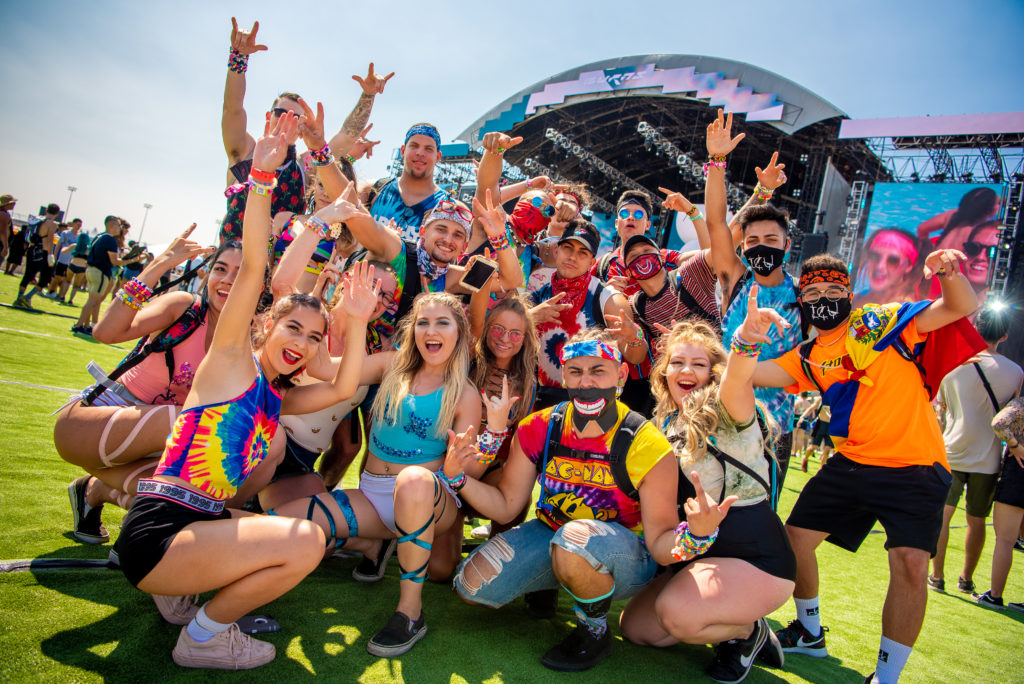 The production and scale the HARD and HARDer stages was absolutely massive this year. The sound was loud and crisp all over the festival grounds. The HARD stage was gigantic, and featured a basic, but clean and efficient design, that really allowed for the artist visuals to be prominent. There was also massive amounts pyro this weekend, and, in typical Insomniac fashion, fireworks galore. Not to be outdone, the HARDer stage also featured a mind blowing design and production value. Although not quite as big as HARD stage, HARDer stage was also huge, and LED panels formed a zig zag pattern on both ends the stage. The same pattern wound into the background the stage to give it an even more 3D look than HARD stage. The lasers came to life for Virtual Self’s closing set on Sunday night. 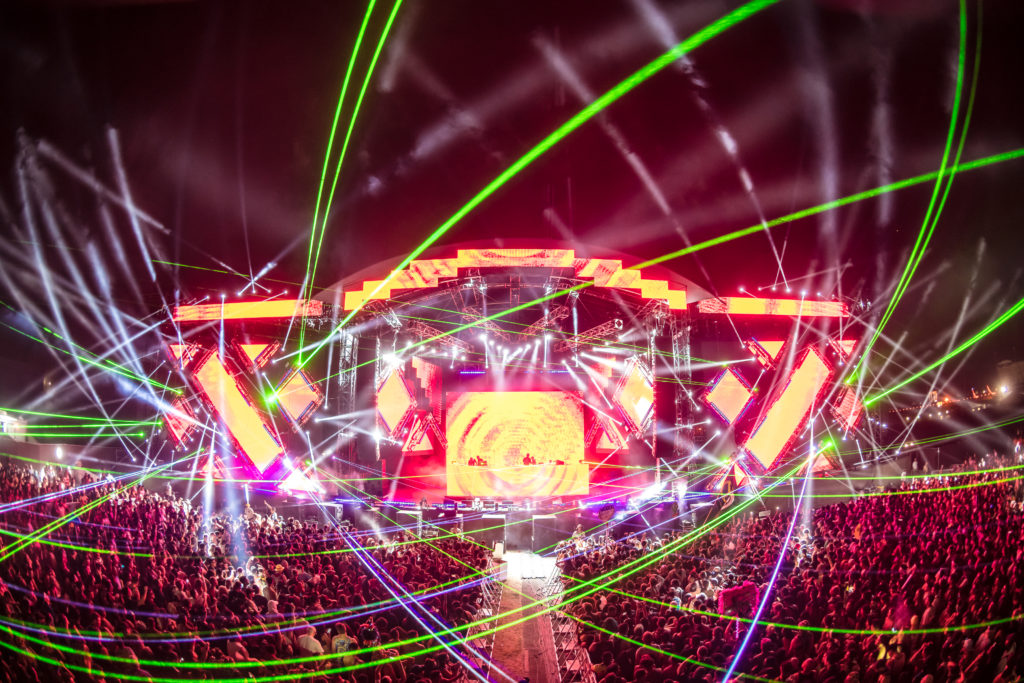 The lineup was absolutely stacked and included some huge, exclusive back to back sets. With an eclectic mix bass, house and hip-hop on the lineup, this was definitely a HARD bill for sure. I started f Saturday in the Green Tent for Sullivan King and his energetic set pounding dubstep. Sullivan had the early crowd going hard as he shrieked and shredded on his live electric guitar. He also brought out Grabbitz for a new collab where they both rap! From there it was on to the HARD stage for Party Favor. The Mad Decent stalwart dropped an utterly danceable set with his trademark festival trap sound and tons new IDs. He also showed f his new 90s themed visuals with references to Nickelodeon and Beavis & Butt-head among other things.

We caught some Joyryde’s set, and it was his usual mix bass house and hip-hop, it definitely kept the energy going. I stayed at HARD stage for Rick Ross’s performance, and the Maybach Music mogul delivered! He was on point, looked and sounded great whilst delivering crisp flows all his 2000s hits from “Aston Martin Music,” “All I Do Is Win,” “Ima Boss” and “Take it to the Head,” and course, “Purple Lamborghini.” Rozzaaayyy!!!!!

From there I headed over to the Green Tent for Valentino Khan’s set. I was wearing a Lakers jersey that day and was approached by a girl who asked if I was going to Valentino’s set. I replied affirmatively and she informed me that Valentino had tweeted that he wanted everyone at his set to wear Lakers gear. The HARD crowd happily obliged on this one. This is totally an aside, but as a huge Lakers fan myself, it was so awesome to see so much purple and gold all across the festival this year. Valentino himself had a fresh black Lakers LeBron James jersey, and #23 was in full effect. The Lakers are back, baby!! 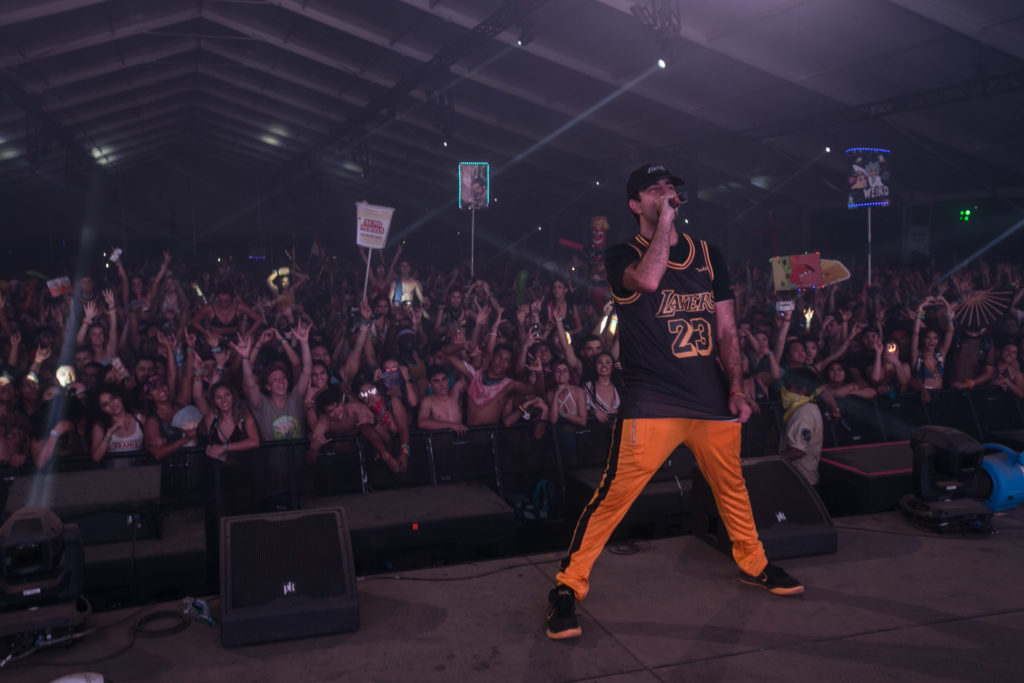 After that it was time for one the premiere back to back sets the weekend, Zeds Dead b2b Jauz. This one was not a new one, they’ve played a couple festival dates together after their huge collab, “Lights Go Down.” It was a massive set, with nighttime in full effect, the full powers the HARD stage were fully unleashed. Not only did crystal clear graphics sprawl across the stage, the pyro and fireworks started getting a workout too. The set was heavy and melodic, packed with both acts biggest hits including, “Rock the Party,” “Squad Out,” “Lights Go Down,” and “You Know.” After that I caught another insane back to back, Yellow Mustard (Yellow Claw and Mustard FKA DJ Mustard) at the HARDer stage. The Dutch trap duo and Los Angeles producer may seem like an unlikely duo, but ever since they collabed on “In My Room” featuring Ty Dolla $ign, they have been a match made in heaven. Their debut live set simply served to reiterate this as the trap music was unleashed during the first part the set, and segued in Mustard’s hip-hop hits during the second part.

We returned (very) early for Day 2 and explored the festival grounds, went on the ferris wheel, and witnessed an enthralling set from Ducky in the Green Tent who provided a set with all new drops completely made from scratch. It feels like the festival finally got going for Day 2 once k?d took over the HARDer stage. He dropped a heavy-as-hell set and had the crowd bouncing out control in the 5 o’clock sun. From there most people made their way over to HARD stage for San Holo. The Dutch phenom wowed the crowd with his live guitar playing and dropped a groovy, bouncy set all his hits and more including “Light” and “We Rise.” The HARD crowd was fully in the building at this point as a sea people filled the Speedway infield.

After that it was what might have been the best set the weekend, Diplo b2b Dillon Francis. Fully leaning into the Speedway motif (more on that later), Diplo and Dillon each showed up in matching racing suits, á la Talladega Nights, as well as featuring a racecar on stage too. The energy the two DJ/producers was uncontainable as they floored the crowd with incredible dance hits from all genres as well as their own inimitable tracks such as “Say Less,” “Waist Time,” “Get Low,” “Watch Out for This,” “Light it Up,” “Bun Up the Dance,” and so much more. 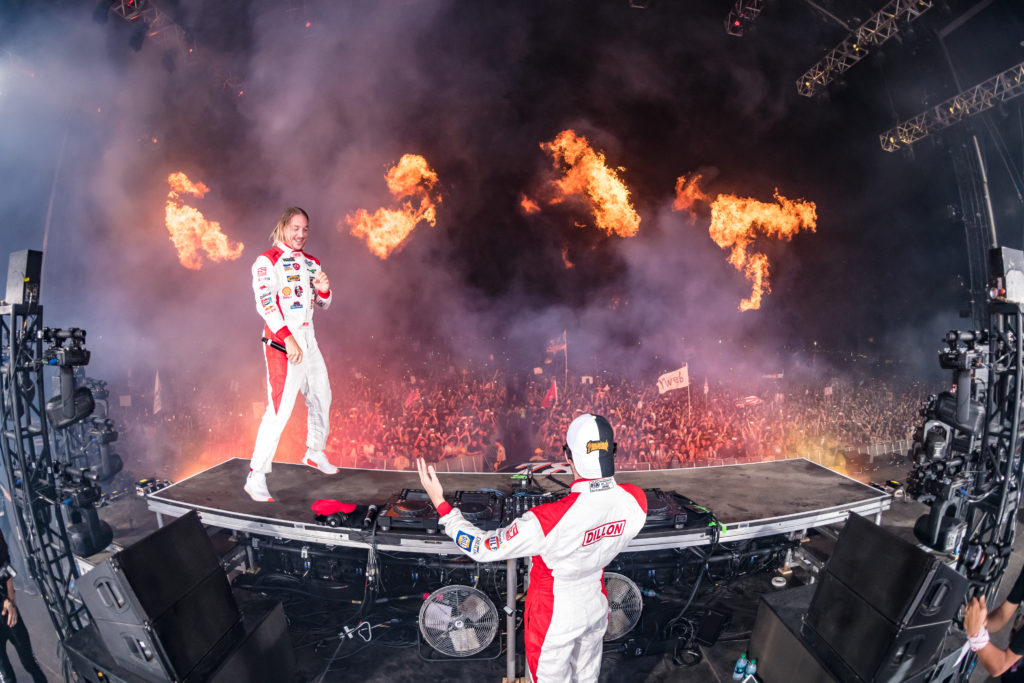 We ended the night at Virtual Self, Porter Robinson’s highly praised and regarded side project. The live show did not disappoint, Porter dropped an array tracks that certainly recalled a 2007-2009 era type rave. The laser work was incredible, almost at an Eric Prydz level. And while we weren’t there to personally witness we, we assume a huge crowd had to have gathered at the HARD stage for Travis Scott‘s set, his first performance since releasing his highly anticipated album, Astroworld last week. 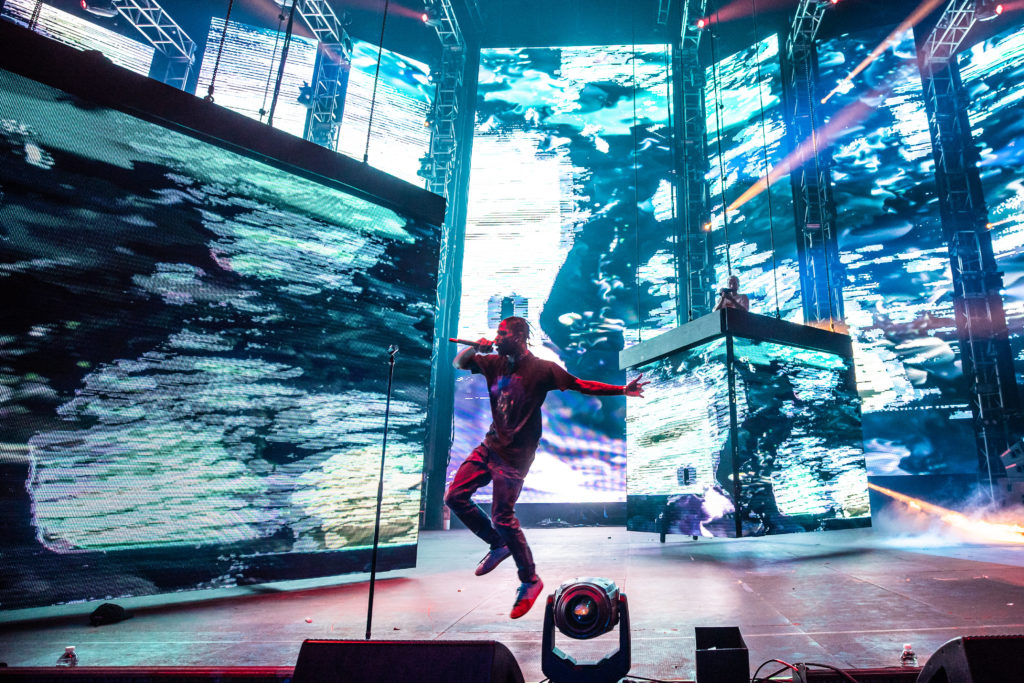 Unless you stayed until the very end on Sunday and endured the two-hour wait to leave the parking lot, HARD Summer 2018 was a resounding success. A packed crowd eagerly and enthusiastically filled the Fontana Auto Club Speedway. Insomniac definitely leaned into the Speedway motif so I would not be surprised to see them make this HARD’s permanent home going forward. Whereas last year there was an air uncertainty surrounding HARD, this year feels like HARD isn’t going anywhere and will be back next year just as big. On a final note, HARD-father Gary Richards’ made his presence felt this weekend too. A plane flying a banner advertising his new AMF Festival made constant laps around the Speedway over the weekend. He reminded those looking up that the HARD Father loves you. Gone but not forgotten. See you at the next HARD Summer!