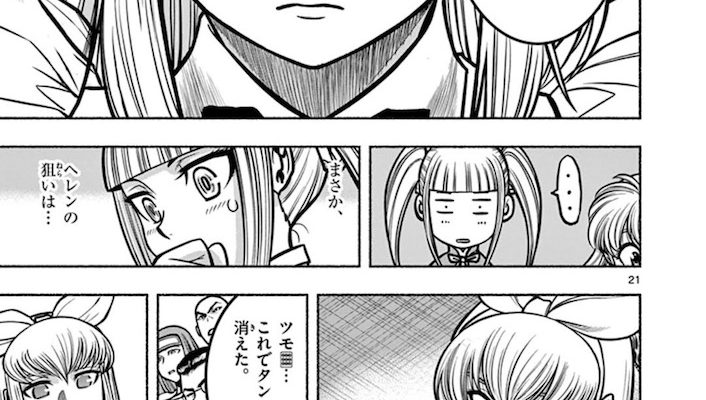 Greatest M ~Mahjong Tournament of Eminent Figures~ is a manga about Helen Keller playing Japanese mahjong co-written by one of the creators of Kakegurui. No, seriously.

If that’s not enough, it’s actually about Helen Keller competing against other famous historical figures in order to determine who will become the next God, as the current Almighty has decided to retire and needs a successor. The solution, provided by other deities: use a test of luck, i.e. gambling, to determine who is best suited for the role. Also, contrary to mainstream conceptions, He is actually a She, and basically acts like a Japanese idol—it’s unclear if that last bit of irony is intentional.

Over-the-top mahjong manga is not all that uncommon. Saki is about yuri and ridiculous mahjong feats. Mudazumo Naki Kaikaku: The Legend of Koizumi is about superpowered politicians instead of superpowered lesbians playing the game. Greatest M is no exception, and indeed bears considerable resemblance to Mudazumo in many ways. But while the essence is very similar, this particular manga presents its players’ abilities as only seemingly magical. No one’s bending reality to cheat—they’re just so impressive that it looks that way.

For example, one of Helen’s opponents is the Japanese artist Katsushika Hokusai (famous for “The Great Wave Over Kanagawa”), and while it seems like he can see what every tile is going to be, it’s actually because he’s such a master of capturing everything in a single moment that his observational skills allow him to metaphorically “freeze” time. As for Helen herself, her life spent both deaf and blind makes her skilled at navigating tricky table situations, owing to the strength she possesses to move forward in total darkness.

I should mention that I’m merely assuming that Helen Keller is the main heroine of the story because she’s on the cover of Volume 1, and it’s been promoted on Japanese manga news sites as the series featuring Helen Keller playing mahjong. Given the tournament format of the story, it might very well be Zhuge Liang who goes ahead. Because Helen would be the most intriguing protagonist, my hopes are that she remains in the spotlight, not least of which is because the manga’s portrayal of Helen’s teacher Anne Sullivan is absolutely perfect.

Greatest M is a fun manga and I like the not-too-serious matching of wits and deception that comes part and parcel with a manga that depicts both theatrical competition and the game of mahjong. I’m not sure how those with disabilities might regard Helen Keller’s portrayal—both in terms of her being a cute anime girl and how her blindness and deafness is depicted in the series. Nothing seems especially offensive to me as of yet, but it is curious to see her drawn like a blind girl you’d see in an older visual novel. Also, while the first volume is a wild ride, I’m not certain that this series can maintain its momentum before the gimmick runs a little dry. I’m going to keep up with it in the hopes that it goes somewhere interesting, even if it doesn’t include Super Saiyan Hitler as a final boss.