We've drafted in Greg Wilson, the former electro-funk pioneer, nowadays a leading figure in the global disco/re-edits movement and respected commentator on dance music and popular culture, to bring us four random nuggets of history; highlighting a classic DJ, label, venue and record each month. 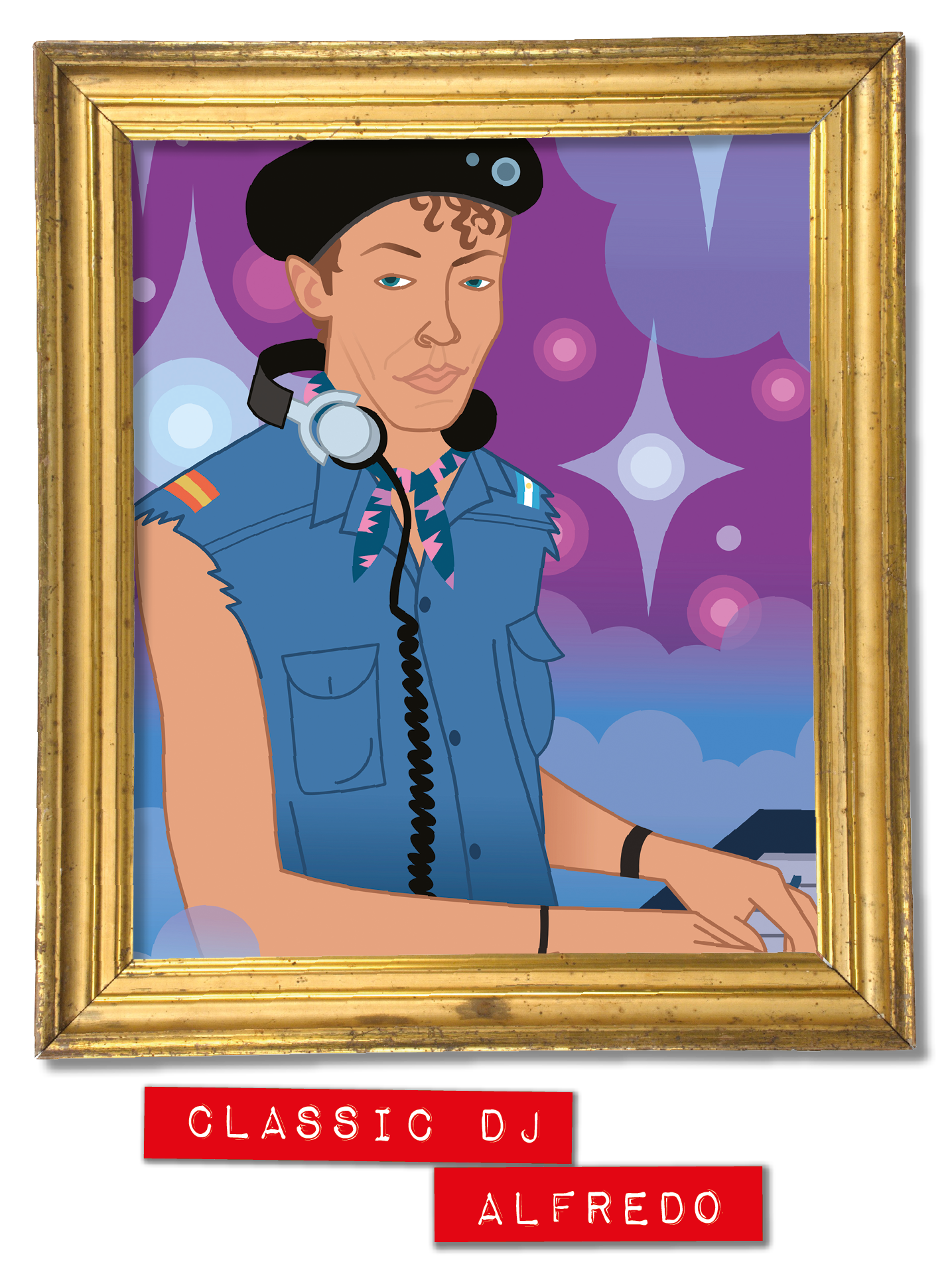 Born in 1953 in Argentina, Alfredo Fiorito emigrated to Spain in 1976, aged 23, making his way to Ibiza, one of the Mediterranean Sea’s Balearic islands. A favourite location of travelling hippies since the late ‘60s, Ibiza was also frequented by rock stars and the jet set, enticed by the its sunshine splendour and decadent reputation – Ibiza’s freedoms unheard of in the rest of Franco’s Spain.

Making ends meet with a variety of jobs, in 1982, whilst working at a bar called the Bebop, Alfredo turned his hand to DJing. He soon attracted the attention of the island’s renowned underground club, Amnesia, which was opened by Madrid-born Antonio Escohotado in 1976.

Alfredo made his Amnesia debut in 1983, and soon the terrace party he hosted absorbed crowds from the rest of the island, attracting visiting VIPs including Grace Jones, George Michael, Boy George and even Prince Albert Of Monaco.

Inspired by DJ Carlos, who played at Es Paradis, Alfredo was revered for his extremely eclectic selections, including pop, indie and rock alongside US and European dance releases, which he served up to a decidedly diverse audience, creating an uninhibited atmosphere within the venue. Back then Scandinavian and German revelers outnumbered the British, but that would all change.

Trevor Fung, a London-based DJ who, for a number of years, had headed over to Ibiza whenever he could, having originally fallen in love with the white isle whilst working for the Club 18-30 package holiday company, provided the key to Alfredo’s global legacy. Initially, inspired by the music he’d heard on the island, he attempted, but failed, to bring the Balearic approach to the nights he held at Ziggy’s in Streatham with his friend, Paul Oakenfold.

Then, in 1987, Oakenfold headed over with fellow DJs Danny Rampling, Nicky Holloway and Johnny Walker to celebrate his birthday along with Fung and his cousin Ian St. Paul, who were working on the island. The friends went out to Amnesia and, having taken ecstasy together, experienced a communal Damascene conversion that would have a seismic impact on the course of club culture, initially back in London, where Rampling would be inspired to unleash Shoom, whilst Oakenfold started Spectrum and Holloway launched The Trip – along with Manchester’s Haçienda, these nights were at the foundation of the UKs acid house/rave movement.

Alfredo would become artistic director at Amnesia, staying there for two years before moving to Pacha, whilst also DJing during the winter months in mainland Spain, and in 1988 DJ Mag dubbed him ‘DJ Of The Decade’. Subsequent Ibizan residencies at Manumission and on the Space Terrace would confirm his legendary status. 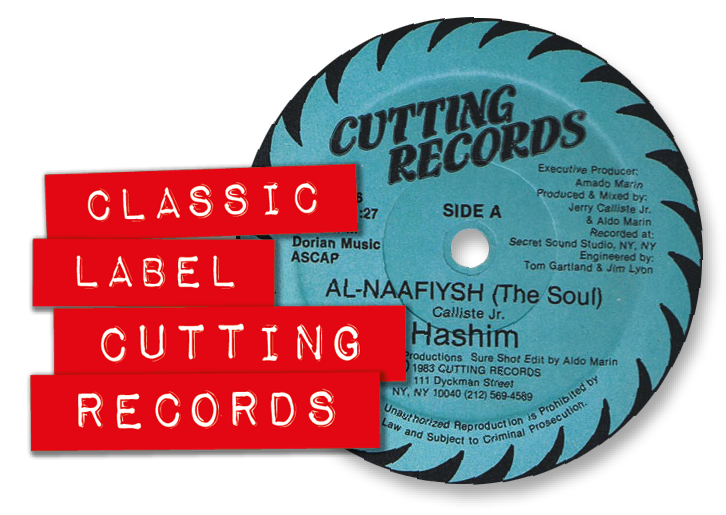 Bursting onto the New York scene at its 1983 zenith via Hashim’s seminal electro cut ‘Al Naafiysh (The Soul)’, Cutting Records, co-founded by brothers Aldo and Amado Marin, in NYC’s Washington Heights, was primed to ride the electronic dance music wave right through the ‘80s and on into the ‘90s.

Aldo, much the younger of the two brothers, had worked at Amado’s record shop from the age of 10. Still in his teens he found his way onto New York’s WKTU radio station and, having established a name for himself putting together the ‘Paco Super Mixes’, he decided to set up a label at the age of 20, with his brother providing financial backing. This followed an early recording credit for his edit on Fantasy Three’s ‘It’s Your Rock’.

Starting off small, they ran Cutting through the record shop initially. It was a auspicious beginning, their first release, ‘Al-Naafiysh’, in November ’83, courtesy of teenager Jerry Calliste Jr. (aka Hashim), who lived in a nearby housing project, landed Calliste a position within the newly-formed company alongside the brothers, with the record quickly gaining cult-classic status on both sides of the Atlantic.

The label stuck to the electro/hip-hop formula for its first few years, releasing a single every three or four months. Aldo’s hands-on approach brought him co-production (alongside Calliste) and mix/edit credits on releases by the Imperial Brothers (‘We Come To Rock’ and ‘Live It Up’) and the High Fidelity Three (‘B Boys Breakdance’ and ‘Satisfaction’) in ‘84/’85, whilst Hashim would follow-up with ‘We’re Rocking The Planet’ and ‘Primrose Path'.

During the coming years the label found itself pushing the new electro influenced freestyle sound coming out of the Latin communities of the Bronx and Upper Manhattan, releasing Sa-Fire’s ‘Don’t Break My Heart’, Giggles’ ‘Love Letter’ and Corina’s ‘Out Of Control’, whilst championing crack edits crew the Latin Rascals.

Along with ‘Al-Naafiysh’, Cutting’s 1986 release, the Aldo Marin produced ‘Let’s Get Brutal’/’This Brutal House’ by Nitro Deluxe (Philadelphia-born Manny Scretching Jr.), is arguably its most influential recording, regarded as an electro/house hybrid that was particularly big in the UK where it twice appeared on the charts, reaching #47 in 1986 then #24 the following year.

In the ‘90s the company enjoyed success with artists like 2 In A Room, Masters At Work, Kathy Brown and 740 Boys. With the turn of the millennium Cutting switched its focus to reissues of their classic material. 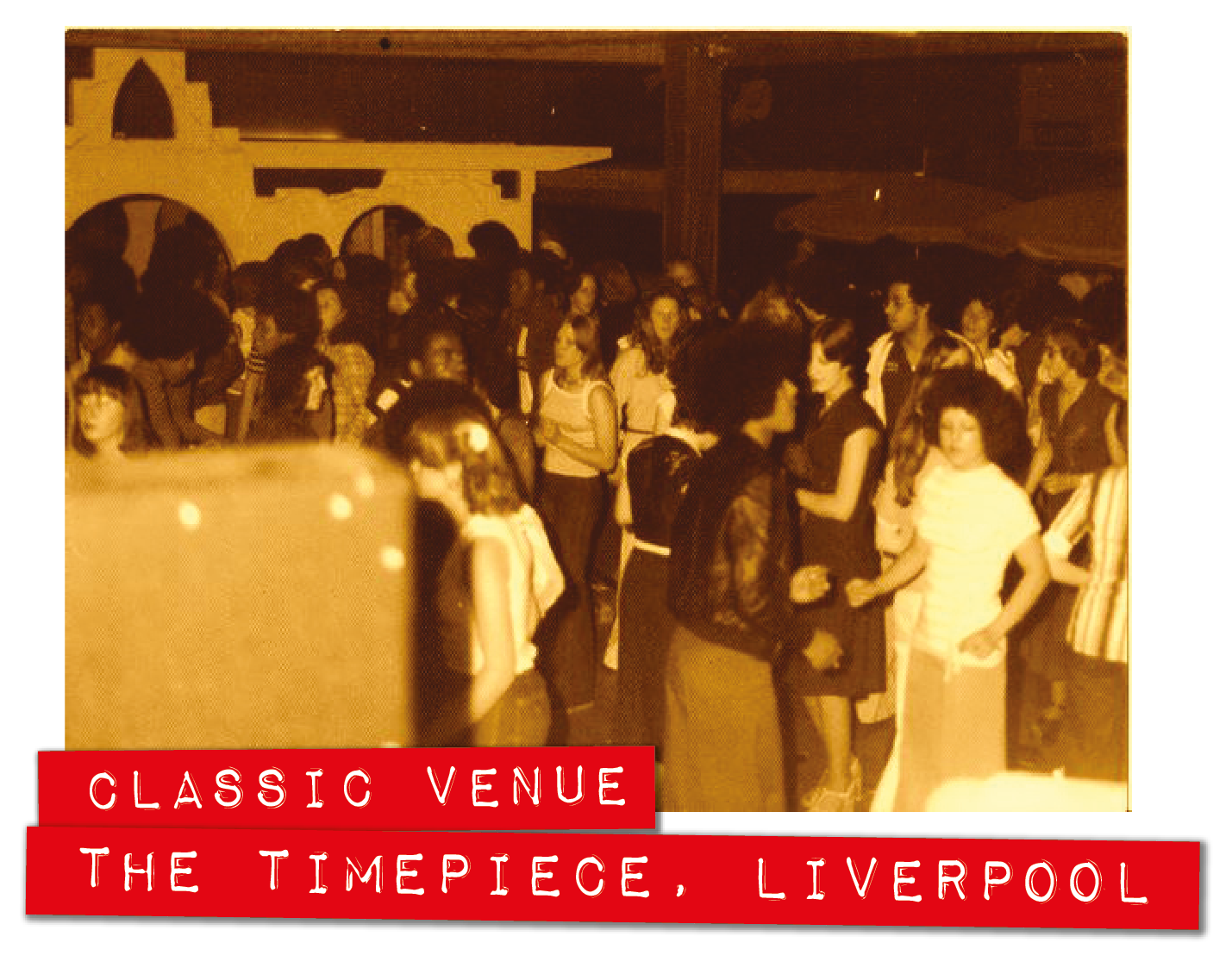 A myth has grown that everyone in the North of England was into Northern soul during the ‘70s, but that’s simply not the case. On Merseyside, most notably, funk held sway at Roy Carrington’s club The Timepiece, with the music DJ Les Spaine played there during the mid-‘70s filtering down to other venues throughout the city.

Another key source for black music in Liverpool was ‘Keep On Truckin’’, the Monday night soul show on BBC Radio Merseyside, presented by Terry Lennaine, who also DJ’d in the local clubs. With Spaine and Lennaine’s playlists consisting largely of the latest US imports, the retrospective Northern sound found itself out of step in the city.

Famed for its weekly all-nighters, people travelled from far and wide to attend The Timepiece, in a similar way to what was happening 20 miles away at Wigan Casino, Northern soul’s most famous venue, but in this case with a majority black audience, the Casino crowd being predominantly white. The club’s clientele included a strong contingent of black American servicemen stationed at US air bases up and down the country who would head to Liverpool for their weekend R&R. Spaine would receive parcels of records from some of them once they’d returned home, supplementing the imports he bought.

Although Liverpool’s black population weren’t welcome in many of the city’s clubs at the time, The Timepiece, like Spaine’s previous venue, The Pun, provided a groove oasis where black kids, and the more adventurous white attendees, would mix.

I first went there myself in 1976 and it made a huge impression on me. I resolved there and then that this was the type of audience I aspired to play to – serious dancers into the most upfront music. This aim was fulfilled when 5 years on I began to play to a similar crowd at Legend in Manchester.

It was one of the most cutting-edge clubs, not just in Liverpool, but the whole country. The Timepiece would also host a number of live acts including Chairman Of The Board, Heatwave, The Ohio Players and local favourites, The Real Thing.

When Spaine hung up his headphones, leaving Liverpool for London, it was to take up a position with Motown Records. The Timepiece was never the same after this, and although DJ Eric Hearn did his best to fill the void, its halcyon days ended with Spaine’s departure.

Subsequently moving on to Capitol Records, Spaine also ran his own promotions company and managed the reggae band Aswad during their most successful period. His involvement in the music business continues, his company representing a number of classic artists. 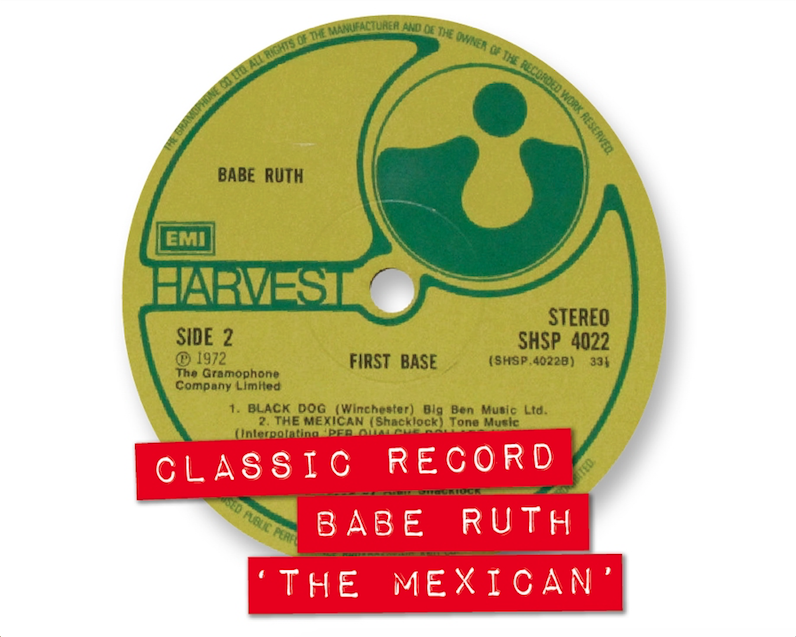 Given that it sold much better on the other side of the Atlantic, and was a key track at the origins of both the disco and hip-hop movements, you could be forgiven for thinking that the group behind 1972’s colossal rock/dance crossover, ‘The Mexican’, originated Stateside. However, Babe Ruth, named after the famous US baseball player, hailed from the unlikely location of Hatfield, Hertfordshire.

Built around Alan Shacklock’s guitar structures and featuring Janita (Jenny) Haan’s commanding vocals, ‘The Mexican’ appeared on their 1972 debut album, ‘First Base’. Recorded at London’s famous Abbey Road studios, and issued via the progressive rock-focused EMI subsidiary label Harvest, the album was certified gold in Canada and sold well in America, but failed to make an impression in its country of origin.

The band led with the single, ‘Wells Fargo’ but it was ‘The Mexican’, not released on 45 until the following year, that proved their most enduring recording. Based on Ennio Morricone’s theme for the Sergio Leone mid-‘60s spaghetti western ‘For A Few Dollars More’, which starred Clint Eastwood – a more straightforward cover of which provided the flip side to ‘Wells Fargo’ - ‘The Mexican’ was picked up, completely independently, by seminal New York DJs David Mancuso and Kool Herc, the track’s raw emotion resonating at Mancuso’s inclusive Loft parties, with its killer break igniting Herc’s Bronx block parties.

The track was first given a disco twist in 1978 by Canadian group The Bombers, which influenced NYC DJ/Producer John ‘Jellybean’ Benitez to undertake his own cover in 1984. Not content with any other vocalist he tracked down Haan and got her to sing on his version, which reached the top of the US Dance chart. The song has been sampled and covered numerous times - most notably appropriated in Afrika Bambaataa & The Soul Sonic Force’s electro classic ‘Planet Rock’ (1982).

Babe Ruth followed up with three more albums in the next three years, the US pressing of their 1975 single ‘Elusive’ finding favour on the UKs Northern soul scene. However the UK version of this single featured a different vocalist, Ellie Hope, as Haan had decided to leave Babe Ruth to form her own group, Jenny Haan’s Lion - the UK record company contractually unable to release the version of ‘Elusive’ featuring her voice.

A new incarnation of the band, featuring Hope, released an album in 1976, but the group soon disbanded (Hope subsequently became lead singer with UK pop group Liquid Gold, of ‘Dance Yourself Dizzy’ infamy). The original core members of Babe Ruth reunited in 2005 to record a further album, ‘Qué Pasa’.

Check out the next Discotheque Archives here