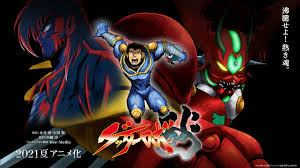 When I was first really getting into anime, it seemed as if the classic 1970s giant robot franchise Getter Robo was in the middle of some sustained renaissance. Whether it was 1999’s Change! Shin Getter Robo: Armageddon, 2000’s Shin Getter Robo vs. Neo Getter Robo, or 2005’s New Getter Robo, it felt as if another anime was always just around the corner. But then the well dried up (albeit not necessarily for other popular classic robots), and it’s been 16 years since. But finally, in 2021, we’ll be seeing a new entry: Getter Robo Arc, based on the manga by Nagai Go and Ishikawa Ken. Notably, this might also end up being the first fairly straightforward adaptation of a Getter Robo manga, and the first to try and really get close to Ishikawa’s art style.

The funny thing about the various Getter Robo anime is that there has never been a straight adaptation of any of the manga. You might be thinking of a long shounen fighting series ending up with a filler arc or three, but I’m not even talking about that. Rather, since the original inception of Getter Robo, the relationship between the many manga and anime have been an odd one. The first Getter Robo manga and the first Getter Robo anime debuted around the same time in 1974, but whereas the former depicted its heroes as virtual psychopaths, the latter portrayed them as relatively kid-friendly good guys. 1991’s Getter Robo Go took similar diverging paths with Ishikawa’s drawings being relatively unchanged and the anime adapting its character designs to a late 80s/early 90s look.

The later works were not much different. Change! Shin Getter Robo: Armageddon and Shin Getter Robo vs. Neo Getter Robo both take elements from throughout the franchise’s history and try to show a more action-packed style reminiscent of Ishikawa’s art, but neither quite goes all the way, balancing 21st-century anime designs with a throwback feel. What’s more, the two aren’t even meant to be connected to each other. New Getter Robo is in a similar boat, being a reboot of sorts that brings some of the insane personalities from that original 1974 manga, but changing just about everything else. This trend is par for the course with Dynamic Pro properties, be it Devilman, Mazinger, Cutie Honey, or anything else. “Canon” and “faithfulness” are distant concepts in this arena.

However, that’s also what makes the initial images for the Getter Robo Arc anime stand out all the more. Both the promo image and the trailer seem to exude a roughness that immediately calls to mind Ishikawa’s aesthetic, where trying to create eye-pleasing shots comes second to pushing a kind of gritty intensity. It’s understandable that anime want to try to grab audiences with more appealing character designs, but here we have Gou, the guy on the promo image, feeling like he almost fell straight out of the manga and onto a poster. If the animators at Studio Bee can really pull off making the anime adaptation look Ishikawa as hell, I will give them all the props in the world.

PS: Kageyama Hironobu was a guest at Anime NYC 2018, and during the Lantis Matsuri concert he actually sang “HEATS,” the opening to Change! Shin Getter Robo: Armageddon. Now, the Getter Robo Arc anime is bringing the song back as “HEATS 2021,” and I have to wonder if Kageyama knew back then that he would be called upon to revive that old banger.